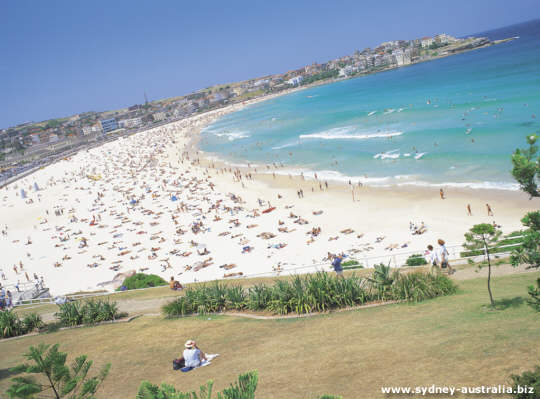 Home to the one of the world’s oldest surf life saving clubs, if not the oldest, this beautiful beach is the closest to the Sydney city centre (8kms). With the bright sunny days we get in Sydney Australia, even winter days can be enjoyable here.

1km long, this south facing beach can attract more than 40,000 visitors on a typical summer weekend.

Offering topless sunbaking, swimming and great surfing for boards and bodies, the beach is popular with Australians as well as international tourists.

Bondi Bars and Places to Eat

Restaurants found in Bondi include a tasty international range as well as seafood, vegetarian and modern Australian. Thai, Mexican, Asian, Italian and other European countries, Middle Eastern, African, Mediterranean, Spanish, Japanese are all there. A number have great ocean views.

Bondi has some absolutely fabulous places to eat, not only for lunch and dinner, but breakfast. They also have a great collection of bars, pubs and other places to enjoy the views while you enjoy the nightlife here:

You can also find lots of cheaper eateries overlooking the beach including al fresco Cafés with great coffees. The ‘Bondi Massive’, located at 2A Campbell Pde in South Bondi has good wholesome breakfasts and lunches with friendly service.

The surf can range from very large surfable waves to calm quiet, one day to the next. Specific areas are marked for board riders, body surfing and swimming. If the surf gets too large for your enjoyment, there are two rock pools at either end of the beach.

At Bondi, you can find some great restaurants, plenty of eateries, pubs and clubs nightlife. The dress is usually casual with t-shirts, sandals and shorts quite acceptable in most of the dining places, many with views. The Bondi Pavilion, on the beachfront, often has entertainment and exhibitions.

There is a great coastal walk (6km) starting at the south end of the beach that takes in spectacular ocean views and allows you to visit a number of smaller but still scenic beaches all the way to Coogee Beach. You can just walk part of the way, there are regular bus services that will take you back to Bondi, Coogee or the City. Or learn how to surf with lessons from a personal instructor.

Hard to resist and easy to get to from the City.

When first found by the early colonials, it was said to be not much more than a huge sandune. Even by 1830 it was still considered too far from the Sydney Central Business District (CBD).

Bathing was banned at Bondi till 1906 (since few people did much else in water prior to this) and the same year, the Bondi Surf Life Club was initiated.

During World War II, the beach at Bondi saw barbed wire and sentries and at one point was shelled by a Japanese submarine, 5 shells being fired. Damage was minimal, lucky, if your house was not the one hit.

The establishment of the annual City to Surf Run sees thousands of runners, many from overseas coming to participate, running from Sydney CBD all the way to the beach at Bondi.

Along the coastal walk starting at the south end of Bondi Beach, you can visit Tamarama Beach, with a great little café. Bronte Beach, further along the track, has a number of cafés and a beachside pool. Next is Clovelly, a sheltered beach popular with families while Gordons Bay is great for snorkelling and scuba diving.

The walk ends at Coogee Beach, popular with backpackers as it features great eating and Selena’s night club, famous for being a venue for top Australian and world bands.

You can also walk from the north end of Bondi Beach to South Head, past dramatic scenes of the ocean from the high escarpments. You also get great views of Sydney Harbour along the way:

The walk also passes two lighthouses, the Macquarie Lighthouse, the first built in Australia was here in 1818, till it was replaced in 1898. The second, at South Head, was built after two ships, the Dunbar and the Catherine Adamson, tried approaching the heads of Sydney Harbour at night and were wrecked.

There are hills, so a certain level of fitness is required. There are also bus services at points along the way, which can take you back to Bondi or to Watsons Bay and the City.

How to get to Bondi

How to get to Bondi - from Sydney CBD (Central Business District): you can take the train from any Sydney train station to connect to trains going to Bondi Junction, then the Bondi & Bay Explorer Bus to Stop no. 11. You can also catch a bus from Circular Quay at the foot of the city cbd.

How to get to Bondi Beach: take the train to Bondi Junction, then the Bondi & Bay Explorer Bus to Stop no. 11. You can also catch the bus along various parts of the route from Sydney city central. The route takes in many of the sights of the Eastern Suburbs.

Another beach, popular with Sydneysiders and to the north of the city CBD, is Manly Beach and gateway to the Sydney Northern Beaches.

The ever popular beaches. You can get to them by bus or train from the city center:

Work, Stay or Study in Sydney

Curious about a working holiday in Sydney Australia? Finding work - jobs in Sydney see Sydney Jobs or Study in Australia.

Ready for a change? Why not try something different with a Sydney Winery Tours.

For Sydney Australia hotels, motels and other accommodation see: 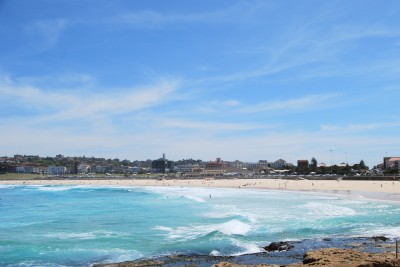