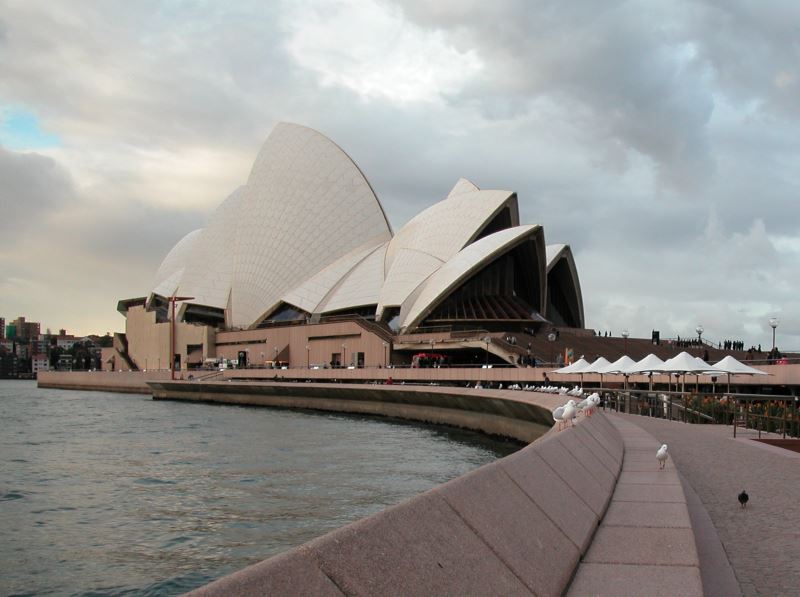 Sydney Harbour, the Bridge and the Opera House (SOH) are a familiar sight for the visitors to this city.

Sydney Cove, located on the Harbour, has familiar landmarks made even more well known to anyone that has seen the NYE fireworks held every year.

Points of interest here include the Harbour Bridge, the Opera House, the Rocks and the Museum of Contemporary Arts, as well as Circular Quay.

Circular Quay acts as a major transport hub for the city, with trains, buses, ferries and taxi services all converging here. From here you can get to any other part of the city, with the water transport easily providing the most scenic routes.

The Sydney Harbour Bridge, opened on March 1932. The bridge is in fact the longest steel arch bridge in the world.

During its construction many who watched the arch of the bridge being built from both ends for some six years - would they meet up correctly so the bridge could be completed? It did. Further reading:

Incidentally, the Sydney Opera House (SOH) also took six years to build. Opened on the 20th of October in 1973, it quickly became a world icon for its ingenious design and modern architecture, made to look like seashells, although many feel the domes look like white sails.

Inside the building, there are a number of public venues, for live theatre, movies, musical performances and dance. It has become known not only for its design but the many world class performances that take place here, not only inside, but outside as well.

Declared a World Heritage Site on June 28th, 2007, Jørn Utzon, the architect, became only the second designer to achieve that distinction in his lifetime. Despite being relatively unknown for his designs prior to that, he went on to create other distinguished works around the world, including Kuwait’s National Assembly Building.

The fourteen shells that make up the building, if put together, would form a complete sphere. The structural design was derived from orange peels, as they proved the structure would work. Today, the building stands proud on the harbour, its use as busy as ever.

More about the Sydney Harbour and landmarks:

You can cross the bridge via bicycle and footpath for spectacular views of the harbour, even climb the arches! Visit the Pylon on the South East side for more information on the bridge. See Map of Sydney showing location of the bridge and the entrance to walk across the bridge.

More about attractions in Sydney:

Main Photo: The Sydney Opera House on the Harbour

Photo: View from the SOH of the harbour and Fort Denison

Sydney Australia -> NSW Tourist Guide -> Sydney Places -> City Centre -> Sydney Harbour, the Bridge and the Opera House (SOH) are a familiar sight for the visitors to this city.

Photo: Sydney Harbour Bridge as seen from the Opera House