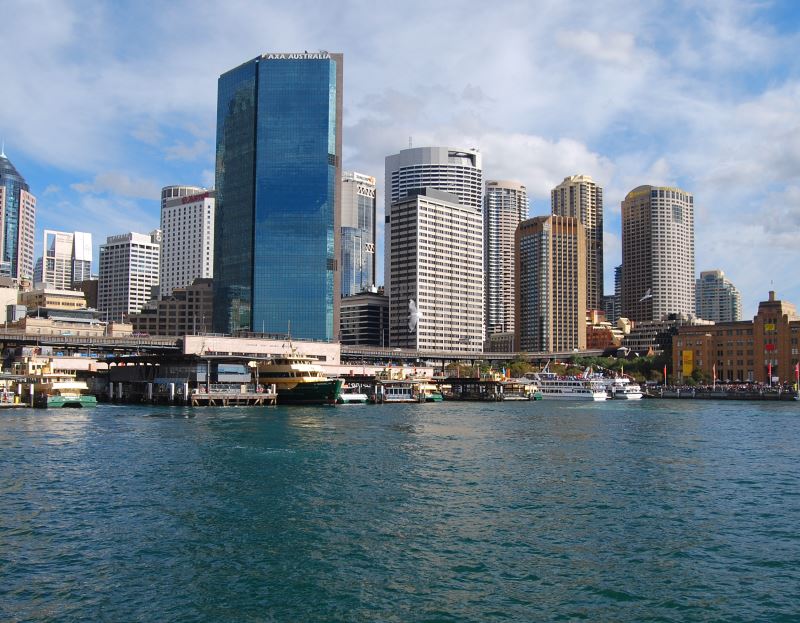 Photo: The south-east corner of Circular Quay at the foot of the City. Here there are trains, ferries, buses and taxis.
Previous Sydney Cove in 1810 Next Australia Day

Circular Quay is a great place to begin exploring the Sydney City Centre. At Sydney Cove, it is a major terminus for our ferries, buses and taxis.

Sydney Cove is where the First Fleet, transporting the convicts from Britain and their guards, first landed and settled in Australia. The fledgling colony began building everything from huts for the prisoners to tents for the officers.

This small cove, had everything the settlers wanted, a water supply, supplied by the Tank Stream, wood to build with and fertile soil. The soil, however, failed the first attempts to grow crops as it was too sandy. This led to establishments further afield, particularly Parramatta, to the west.

Nowadays the cove is busy place; Cruise ships, ferries and a multitude of watercraft use this place. There are regular train and bus services so from here you get afar as Manly Beach, Bondi Beach and the Cronulla Beaches. You can also go west, north and south from here to virtually every part of the city. Get a public transport ticket that will last you the time you are here and you are set.

Located at the cove today are the Opera House and other Sydney attractions.

The Rocks, located on the west side of the cove, was so named because of the many rocks strewn about the headland. This later proved to be useful, as much of the sandstone here was used to build the more substantial buildings needed by the government, importers and traders.

Not much later, a brickworks was established on the other side of the cove, to supply the colony with much needed bricks. You can see this and other developments at Circular Quay and the Rocks on the 1855 map:

Places to Eat at The Rocks

Another major Sydney attraction located here is the Museum of Contemporary Arts. This museum has aquired a wonderful collection of contemporary arts. You will also find ongoing changing exhibitions of modern Australian and World visual arts.

Nearby Places to Visit here include:

Map showing the location of Circular Quay, The Rocks, the Sydney Opera House and other nearby places to visit:

Main Photo: The south-east corner of Circular Quay at the foot of the City. Here there are trains, ferries, buses and taxis. 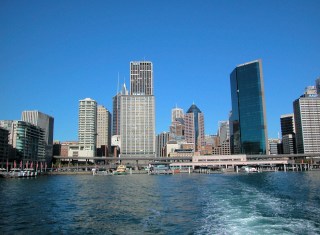 Photo: View on the Ferry to Manly

Photo: The Sydney Opera House as seen from Circular Quay. Plenty of Activity on the Water as well.