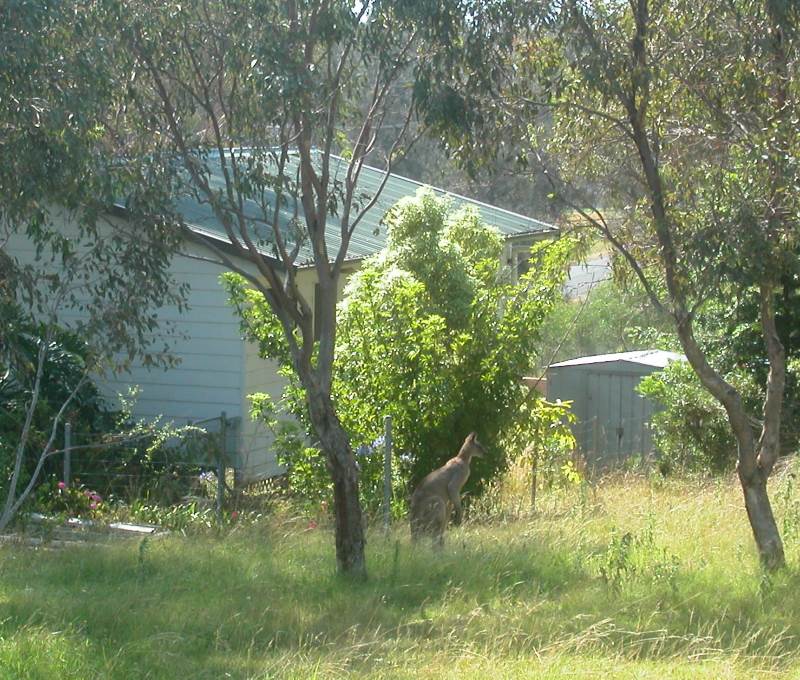 Photo: Kangaroo having a Feed in a Neighbor’s Backyard, Ears alert to the Photographer’s Presence.
Previous Glossy Black Cockatoo Next Koalas

There are 67 species of macropods in Australia, herbivorous marsupials that hop for mobility. These include kangaroos, which can be quite tall, or small, such as the quokka. Being marsupials, they carry their young in a pouch.

With their strong rear legs they can travel long distances with speed. The elasticity in their hind leg joints also help this, with minimal effort the bounce in their tendons give them more, uh, bounce for a certain amount of energy expenditure with minimal added effort.

Since they can travel at speed, they will often roam far and wide for food. They feed on grasses, vegetables, leaves and sometimes fungus, being herbivores. They have a useful ability to turn their ears in different directions to listen for any sign of danger.

Some of these species, regretfully, are under threat but the larger ones, such as the red and the eastern grey kangaroos are widespread in many places on the continent and in Tasmania.

They are not only under threat from urbanization, but introduced feral predators, such as cats, dogs and foxes. They can also get hit by cars or trucks, when you see the yellow kangaroo sign on roads, please drive carefully.

Also, do not feed them as they are more than capable of finding healthy food on their own. Their powerful legs and tail, as well as the sharp claws on their forearms, can cause serious injury if they become frightened. They do not carry boxing gloves.

Kangaroos, wallabies, wallaroos and pademelons all belong to the macropod family and they live in all of Australia’s regions including the desert, mountain ranges and on the coast.

Wallabies are generally smaller than kangaroos as are pademelons, but since some wallabies can reach a height of six feet (182 - 183 cm.) the designation between them is somewhat arbitrary.

Kangaroos in a group are also referred to a ’mob of roos’ in Australia.

The very name ’kangaroo’ supposedly came from a mis-understanding. However Joseph Banks, the botanist with Captain Cook’s exploratory ship, the Endeavour, had spoken with the local Aboriginals to ask their name for these hopping animals. The reply was ‘gangurru’.

A closeup photo of a kangaroo can be found here:

There are zoos in all the major cities, of course, but there are also sanctuaries and conservation parks scattered around the country. Some even allow you to pet them, under controlled circumstances. More about Wildlife Parks in Australia.

Wildlife, including kangaroos, wallabies, wombats and multi-coloured birds abound in the Blue Mountains National Park. These animals can be seen in their habitat with a bit of luck. Other animals include the brushtail possum, which like most marsupials is nocturnal.

Birdlife that can be spotted here includes lorrikeets, white cockatoos, parrots, rosellas and eagles. The lyrebird, with its distinctive fan tail and ability to mimic other birds, can be heard in many parts of the Blue Mountains.

Main Photo: Kangaroo having a Feed in a Neighbor’s Backyard, Ears alert to the Photographer’s Presence.