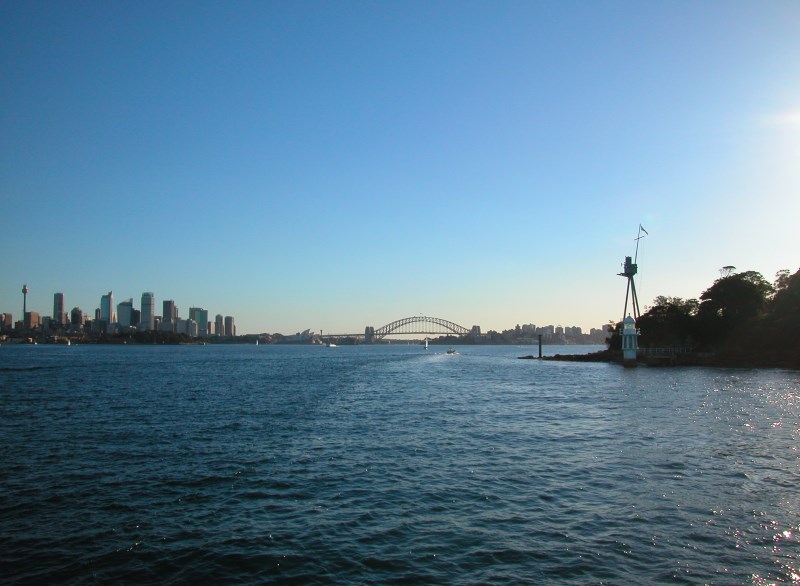 Photo: View of the City on the Harbour and Bradleys Head with the masthead of the HMAS Sydney.
Previous Views from the Harbour Next Sydney Harbour Beaches

One of the most prominent features as you travel back from Manly by ferry is the headland of Bradleys Head, part of the suburb of Mosman. On the north shore of Sydney Harbour, there is a lighthouse there, first built in 1905.

There is now a park there, with walkways, picnic areas and great views of the harbour and the city. A short walk just further along you will find Taronga Zoo.

Named after William Bradley, a British naval officer that had sailed on the Sirius, one of the First Fleet Ships. He helped survey the Harbour (then known as Port Jackson).

Promoted to first lieutenant on the Sirius on 25 October 1786, William Bradley along with captain John Hunter completed their survey in January 1788. Bradleys Head was initially named Bradleys Point. Those sailing on Sydney Harbour will recognise its prominence as you head towards the city, as soon as you come around it, you can clearly see the Sydney Harbour Bridge, the Opera House and the City.

Aside from the lighthouse, another feature on the headland is the masthead of the HMAS Sydney. This light cruiser, purchased from the British government and commissioned in 1935, served in the Mediterranean from mid-1940.

While there, she participated in a number of sea battles with Italian ships, sinking two warships and some merchantman ships. She was also used on shore bombardments and convoy escorts.

Returning to Australia as she was assigned to helped to protect the country from German raiders, she was sunk by the Kormoran, an auxiliary cruiser of the German navy. Built by Germany during the pre-war years to circumvent the Versaille Treaty she looked more like a merchant ship than a naval vessel. She carried a number of guns, particularly six single 15-centimetre guns, hidden by removable metal plates, two 37mm anti-tank weapons as well as an assortment of anti-aircraft guns and torpedo tubes.

However, she was disguised as the ’Straat Malakka’ a Dutch merchantman and when told to give her call sign, she hoisted the Dutch flag as well as identifying herself as the Straat Malakka. When the Sydney demanded to see her secret call sign, the Kormoran dropped its disguise, and hoisted the Kriegsmarine flag.

Although quite formidable, she was outclassed by the Australian light cruiser. However, the Kormoran’s disguised and hidden guns came into use as the HMAS Sydney sailed up close to inspect the merchantman. Being so close, it negated the ability to use the Sydney’s bigger guns and superior speed.

Both ships were lost during the ensuing battle. When the HMAS Sydney did not arrive in Newcastle as planned, search parties were sent out. They found a number of German sailors on rafts who were rescued. There were, tragically, no survivors of the Sydney. An extensive explanation is available at Wikipedia:

Battle between HMAS Sydney and the Kormoran

Photo: View from the Manly ferry as it approaches Bradleys Head on its way back to the city.

Main Photo: View of the City on the Harbour and Bradleys Head with the masthead of the HMAS Sydney.