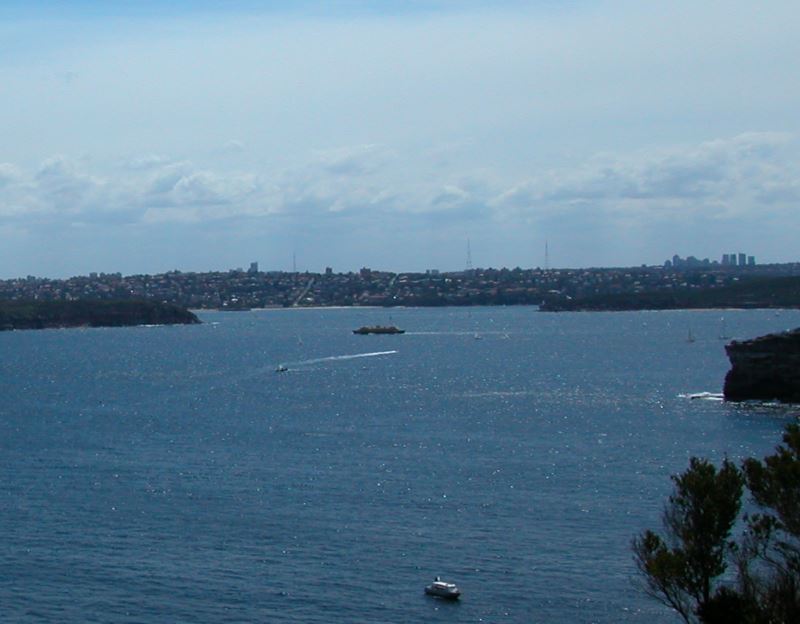 Photo: Hunters Bay, near the Center of the Photo. The Office Towers of Chatswood are in the Distance
Previous Harry Seidler Next Heads of Sydney Harbour

Situated on Sydney Harbour and located in the suburb of Mosman is Hunters Bay.

The Sydney suburb of Hunters Bay has Balmoral Beach, one of a number of beaches on Sydney Harbour.

Military Road, the main route (but not the only one) that can take you from Sydney city centre after crossing the Sydney Harbour Bridge to the northern beaches. Here you will find Boutique shops, antiques stores, chic cafés and a number of excellent restaurants on Military Road.

Balmoral, in the suburb of Mosman, has trendy boutique shops, antiques stores and chic cafes on Military Road, with Taronga Zoo just down the road on the harbour. There are a number of harbour beaches as well, as can be seen in the photo.

Balmoral Beach is popular from just before sunrise till after dawn, with hardy early morning swimmers to walkers and joggers, while during the day there are picnickers as well moms and their small children to enjoy the calm beach. Normally devoid of any waves as it is protected by the harbour, there is a shark proof net area to protect swimmers.

The beach has been enjoyed for thousands of years, as there are signs of human habitation on the beach itself by the Aboriginal peoples that lived there, including in the cave that is still there, at the beach.

There was a tram service to the beach from the Spit (A bridge that crosses the waters to the Northern Beaches) to the beach. There is now a regualr ferry service from the city at:

Top Photo: The Manly Ferry passes Hunters Bay on its way to Sydney City. The tall buildings in the distance are of Chatswood in the Northern Suburbs, with North Sydney on the extreme left.

Getting to Circular Quay, where you can catch a ferry is easy, as it is a major train, bus, taxi and ferry terminus:

Main Photo: Hunters Bay, near the Center of the Photo. The Office Towers of Chatswood are in the Distance