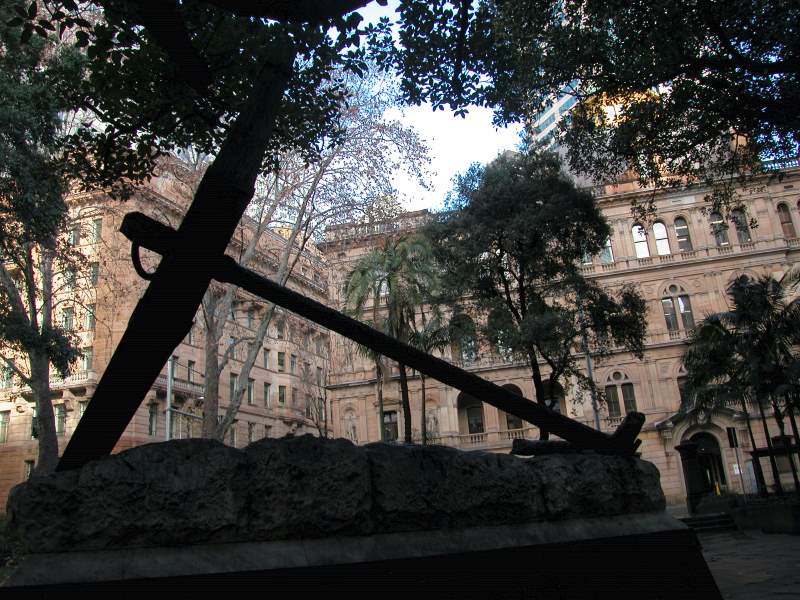 There is a small park here, dedicated to veterans on the corner of Bridge and Loftus Sts. Called Macquarie Park, its main feature is the HMS Sirius Anchor, as well as an cannon from the same ship. This ship was the flagship of the First Fleet which brought the convicts and their guards to this continent, soon to be called Australia (pronounced Straya by many).

The small park at Loftus St and Macquarie Place has artefacts on display, including a cannon from the HMS Sirius, a British Navy frigate that served as the flagship of the First Fleet, as well as its anchor.

The ship HMS Sirius was lost at on one of the reefs at Norfolk Island in 1790. A cannon and the anchor were pulled out of the water and placed in the park in 1917.

Cannon of the HMS Frigate Sirius

Much of Sydney’s history began in this part of the city. The Rocks, Circular Quay and the Opera House are all within short walking distance of each other.

Surrounding the park is a busy terminus for Sydney buses, joining with the ferries and trains of Circular Quay:

George St was one of the first wide thoroughfares planned through Sydney by Governor MacQuarie, it leads to Broadway, where Central Railway Station is and eventually becomes Parramatta Rd.