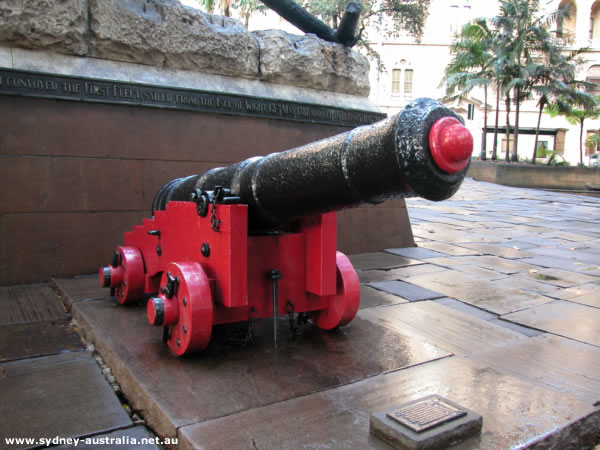 Cannon of the HMS Sirius

The cannon in the photo is an artefact from the First Fleet, the ships that brought the first convicts and their guards from England in order to establish a colony here on the eastern coast of Australia.

The cannon is actually from the HMS Frigate Sirius, the flagship of The First Fleet. This ship had served the colony well until its loss at Norfolk Island a few years later, on the 19th March 1790.

Originally built in 1780 as a merchantman and named the ’Berwick’, it was purchased by the British navy in 1781, after a fire. Commissioned in January 1782, it was refitted again in 1786, to sail along with the other ships to Australia.

The British had sent their convicts to the Americas for many years, however, the American Revolution and subsequent loss of the colonies there had put a stop to that. It was then decided to set up a colony on the east coast of Australia, New South Wales.

Not far from where this cannon is now placed at Macquarie Place Park, is Sydney Cove. This small cove at the time was backed by a thick wood, fed by a small fresh water stream.

Loss of the HMS Sirius

Both the cannon and the anchor pictured here is believed to have come from the Sirius, having been found offshore in the waters of Norfolk Island at Sydney Bay. Governor Phillip, the first Governor of the Colony of NSW, reported this tragic loss with disappointment.

HMS Frigate Sirius was regarded as vital for the colony, having been the flagship for the First Fleet and later having saved the early settlement from starvation.

’You never saw such dismay as the news of the wreck occasioned among us all - we looked upon her as our sheet anchor’ - Governor Phillips.

The nearby Museum of Sydney has more artefacts from the First Fleet and the lives of the convicts and settlers in early Sydney: