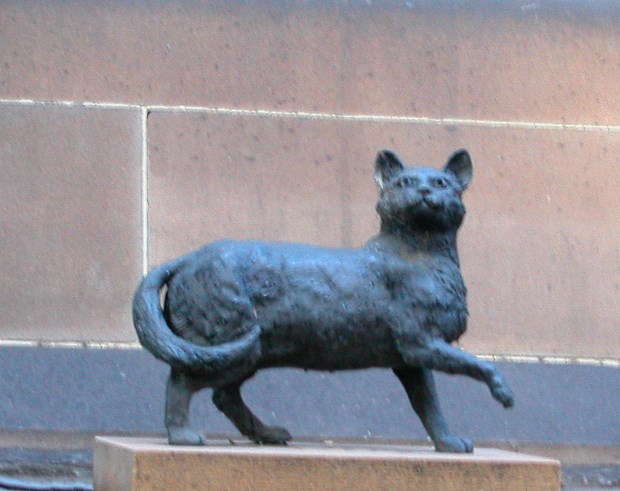 Trim of the good ship HMS Investigator became the first cat to circumnavigate Australia, having belonged to Matthew Flinders.

Born at the end of the seventeenth century as a member of the First Fleet, the ships that were sent with convicts and their guards from Britain to colonise New South Wales, as the East Coast of Australia was first named by Captain Cook.

Trim not only accompanied Matthew Flinders on his epic exploratory voyages (1801–1803) around Australia, but also Bass and Flinders when they charted the coast of Tasmania.

TO THE MEMORY OF
TRIM
The best and most illustrious of his race
The most affectionate of friends,
faithful of servants,
and best of creatures

He made the tour of the globe, and a voyage to Australia,
which he circumnavigated, and was ever the
delight and pleasure of his fellow voyagers
Written by Matthew Flinders in memory of his cat
Memorial donated by the North Shore Historical Society

According to Matthew Flinders, Trim was black with white paws, with also a white star on his chest and a white chin. Sadly, he went missing after he and Matthew Flinders were captured by the French in Mauritius and accused of spying.

You can see the statue outside the:

Items that pay tribute to Trim can be purchased at the library.

Of course, there are those that would argue it was Matthew Flinders who was allowed to accompany Trim, Cat Extraordinaire, on their journey to circumnavigate the continent of Australia.

Trim was also the first cat to taste the delicious seafood available from Tasmania. More should be talked about cats in general.

Note: This article is becoming much too silly. Further reading about Australian History below - Ed.