The rich fertile region of Macarthur is the birthplace of the Merino Wool Industry. It also contributed heavily to Australia’s early growth in the wheat industry and now even wines.

Covering a region of more than three thousand square kms. it has become one of the fastest growing in the population reaches of Sydney Australia, yet much of it is still semi-rural.

The largest Botanic Garden in Australia. Over four hundred acres of plants and trees set on a gentle rolling hill property.

Family home of the Australian Wool Pioneers John Macarthur and his wife Elizabeth.

Dharawal National Park is known for its many eucalypts, swamps, waterfalls and rockpools. It also protects a number of Aboriginal Heritage sites, some of which you can visit along the many walks in the park.

Campbelltown, declared by Governor Macquarie in 1820, was not really settled till 1831. More about Campbelltown Places to Visit.

The semi-rural area of Camden. Places to visit include Belgenny Farm, built by convict labour on the original grant of 5000 acres to the Macarthur family by Lord Camden in 1805, pioneered many of early Australia’s farming traditions.

There is a lovely heritage walk taking in the historic buildings of the Camden township. Enquire at the Camden Visitor Information Centre. More about Camden Things to Do.

All along the coast of NSW there are sleepy villages nestled amongst the headlands, long golden sand beaches, pristine forest national parks and a great lifestyle to match. This includes the Central Coast NSW, the North Coast of NSW and the South Coast of NSW. 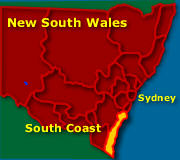 Main Photo: Map of the Macarthur Region - Click to Zoom Out © www.sydney-australia.biz