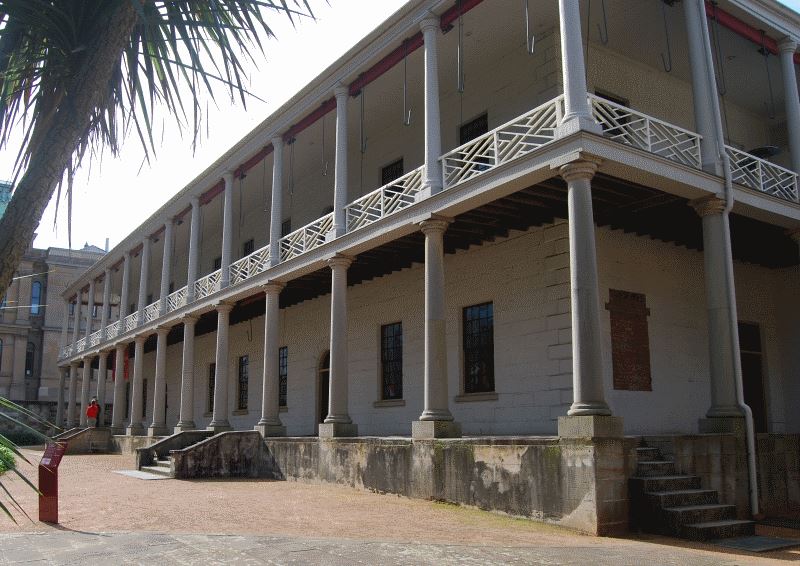 The Sydney Rum Hospital, whose construction was paid for and built by developers that were allowed to import tens of thousands of gallons of rum into the New South Wales Colony as repayment. The profits would be kept by them.

The early hospital regretfully quickly gained a reputation as the “Sidney’ Slaughterhouse” as people who went there for treatment often died rather than get better.

The hospital was completed in 1816. Francis Greenway, the Colonial Architect, was asked to inspect the hospital buildings and found them to be sub-standard with weak foundations and that short cuts that had been taken in their construction.

The three builders eventually claimed the whole enterprise was unprofitable for them, but one wonders. They had permission to import rum, the generic term for all liquors, to a total of 45,000 (204,574 litres) and then 65,000 gallons (295,496 litres).

There were three buildings built, the one in the photo was the southern wing of the hospital. This building first served as living quarters for the resident surgeons, D’Arcy Wentworth was the first. The central building was demolished in 1897, the north wing became the Legislative Council Chambers and still retains the front facade of the original building.

The Sydney Rum Hospital is now home to the Mint, begun there in 1855 to serve the needs of the New South Wales colony for coinage.

The machinery for producing coins were the latest and of a revolutionary design, shipped piece by piece from England. Now the Sydney Mint Museum, it is a must see for numismatists of all ages, and those interested in Australian History.

D’Arcy Wentworth arrived in the colony of New South Wales on the 28 June 1790. First serving as assistant surgeon for the prisoners placed on Norfolk Island. Upon leaving there, he served for a while as a justice of the peace in the NSW government.

When Governor Macquarie reformed the Police Force, D’Arcy Wentworth was put in charge and served there for almost ten years. He also helped found the Bank of New South Wales on the 12th of February in 1817.

Just as notably, he had a number of run-ins with the first governor of NSW, William Bligh, as did many other prominent residents of the colony. Although it is not sure what kind of role he played when Governor William Bligh was sent packing back to England by a group of upsurpers, he served the colony well, particularly after the arrival of Governor Macquarie.

Later this building became the Sydney branch of the Royal Mint after the discovery of gold in Australia, till 1926.

See an 1855 map of Sydney with the Sydney Hospital and Infirmary (26) just north of Hyde Park. Hyde Park Barracks was an immigration depot then:

Map showing the Museums in the centre of Sydney: 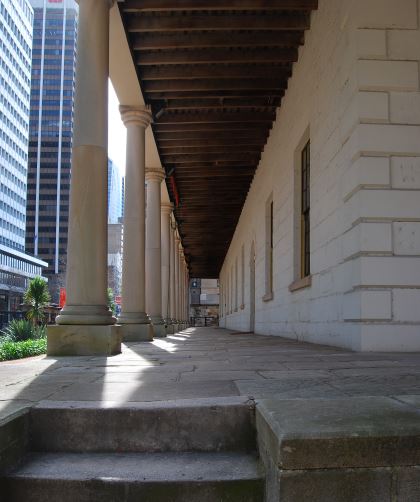