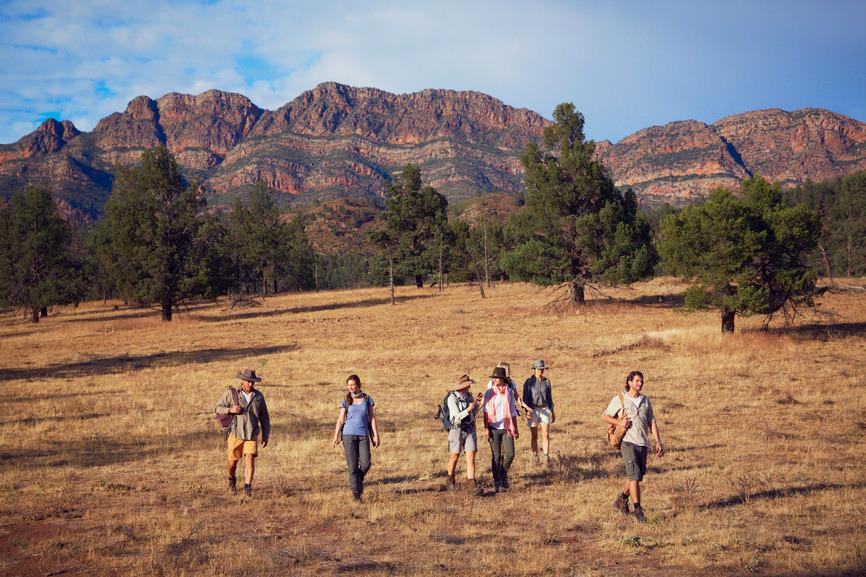 The ranges were formed some 500 million years ago, when the limestone and shale deposits were buckled and folded upwards. Now, the eroded remains have formed what is now known as the Flinders Ranges.

Aboriginal rock art sites are found in the park, left by the Adnyamathanha people, traditional owners of the land. They also left stone arrangements, burial sites and ochre quarries, their descendents still live in the region.

There are numerous walks in the park all along the ranges. One of the many interesting ones available here is the Living with Land Walk, from the Old Wilpena Station, where you can find out more about survival, improvisation and self-sufficiency ideas and techniques that the Aboriginals, early European explorers and settlers employed.

On the Sacred Canyon Walk you can view the rock art left by the Adnyamathanha over many thousands of years, used by them to teach their children and for religious ceremony.

The Wangara Lookout walk, starting at the Wilpena Pound Visitor Information Centre allows you to view the natural rock formation that was formed over many years of erosion. There are also grand views of the region along the walk.

More detailed information about the many walks available can be found here: Bushwalking the Flinders Ranges.

Wallabies, found in the wild in many parts of Australia, are a smaller breed of kangaroo and like their bigger cousins, come in a variety of species and sizes. They also carry their young in pouches (marsupials) and eat plants and grasses making them herbivores.

Even though they make look cute and cuddly, they have powerful hind legs and a strong tail. It is not recommended to hug them even if you were able to approach them (unlikely) and please do not feed them, they are quite capable of finding the right kind of foods for themselves.

At the Wilpena Pound Visitor Information Centre, you can get information about the park, walks, camping and things to do while here. Phone: +61 8 8648 0048.

There are strong fire restrictions in the park, particularly during the warmer months: 1 Nov to 30 Apr, when it is completely banned. You can only camp in designated areas. Please only take photographs and leave only footprints.

In the arid regions of the western part of the Great Simpson Desert in the Outback of central Australia, you will find Witjira National Park, a vast area protecting rare native animals and rare flora.