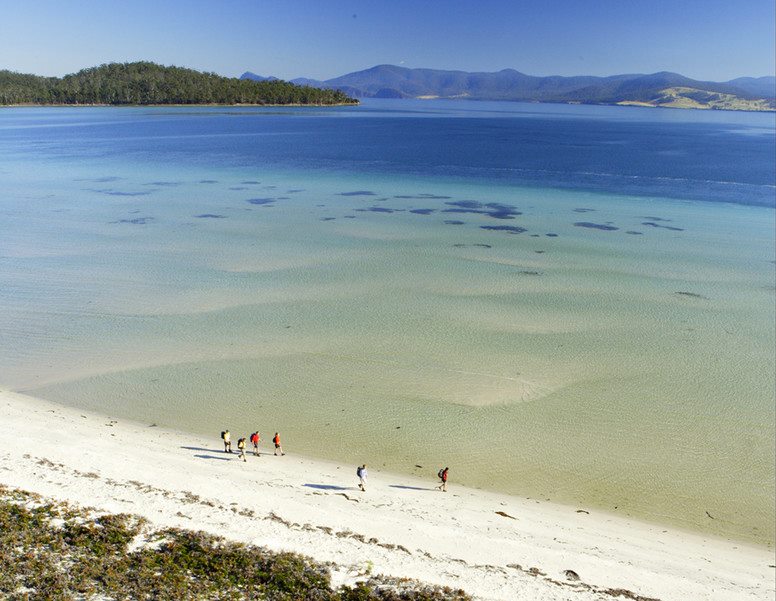 See the Tasmania Australia Map showing the location of Maria Island and Triabunna, where the island ferry leaves from.

Touring Australia: The beautiful and pristine Maria Island, located just to the east of Tasmania was once used as a convict penal settlement. The whole island, covering a total of 115.5 square kilometres is now National Park and can be visited by ferry.

There are historical convict settlements to explore, you can walk up to Mount Maria for great views of the surrounds, as well as the Bishop and Clerk Peak, on the north end of the island. The Painted Cliffs, a natural wonder of sandstone cliffs are located near Darlington, as well there are the Fossil Cliffs at Fossil Bay.

Popular activities here include exploring the island on foot as well as mountain biking, scuba diving, snorkelling and swimming. Spotting wildlife and birdlife occur almost all the time.

The island was first designated as a place of punishment and labour for those prisoners who commited crimes after being sent to Tasmania. However, those who were sent to Maria Island were not regarded as extreme as others sent to other parts of Tasmania including Macquarie Harbour and later, Port Arthur. See more about convict history: History of Hobart.

Later, the island became a centre of wine and silk production, as well as fruit-growing. Later, a farming community developed run by a number of families (many places on the island still bear their names). Eventually, the Tasmanian government purchased their properties to establish the National Park, declaring it in 1972.

On the Maria Island Walk, a 4 day walk of small groups of just ten guests and two guides, you can enjoy gentle walking by day and candlelit gourmet dining at night. It includes delightful accommodation in natural surrounds.

You can find out more information about the island’s history, walks, wildlife, places to visit and activities at the Triabunna Visitor Information Centre, located a ninety minute drive north from Hobart.

Getting There and Places to Stay

During the warmer months of Summer and Autumn, you can catch a ferry from Triabunna on the east coast of Tasmania twice daily. You can make day trips, or you can stay on the island at designated camp sites. There is also accommodation at the Penitentiary, originally designed for the convicts sent here. Don’t worry, it has been significantly upgraded since then.

Note: The weather here can change rapidly, from sunny to cold rains. More about exploring the World Heritage Tasmania Wilderness.

Surviving in the Bush

About Travelling in the Australian Bush.