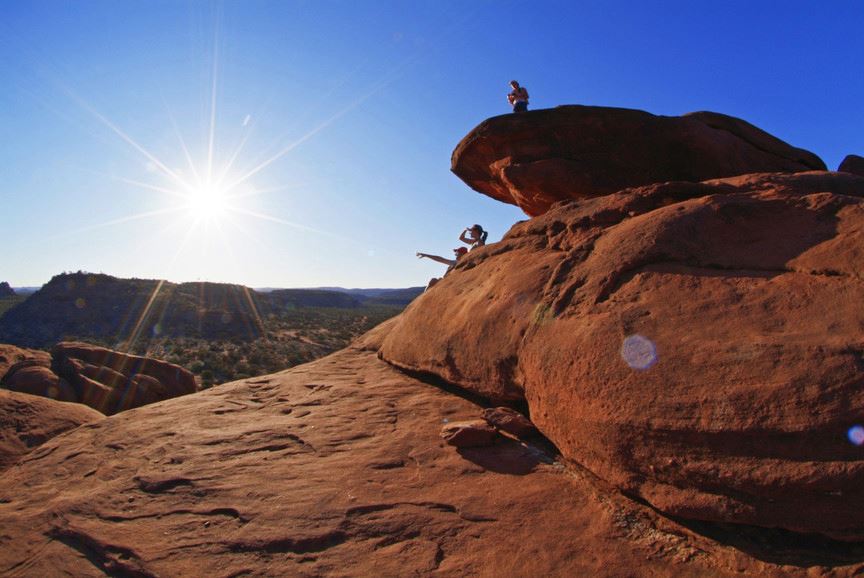 Touring Australia: In the Red Centre of the Northern Territory, four national parks can be accessed via the road called the Red Centre Way (4WD), including natural wonders such as the Henbury Meteorite Craters, Ormiston Gorge, the Olgas and Uluru. You can experience unique desert life, quite different from other world’s desert regions.

Well worth trying is taking at least one of the Aboriginal guided tours that are available in the region, featuring how they survived and lived, the native plants and animals and about the stories of the Dreamtime ancestors, who forged the land and natural formations. Territory Parks Alive are guided walks that Parks Rangers conduct (May to September), enquire at one of the visitors information centres in the NT for more info or at the Parks and Wildlife Services office in Alice Springs.

Note: If wanting to participate in walks or biking in the region, please take at least 3+ litres of water per person per day, a brimmed hat, sturdy shoes, sunscreen and snacks. Plan ahead and talk to the rangers.

The West MacDonnell Range National Park is a spectacular example of the desert parks of the Northern Territory. The Western Arrernte people have lived here for thousands of years and have many interesting Dreamtime stories about the creation of the natural formations that are located here.

Also west of Alice Springs and south of the West MacDonnell Range National Park, Finke Gorge is a particularly beautiful park covering some 48,000 hectares. There are walks in the park, as well as 4WD tracks that you can access. Be sure to talk to the rangers before undertaking such journeys in the region.

Places to visit in the park include Kalarranga Lookout, Mpaara amphitheatre, Finke River and Illamurta Springs. Palm Valley which has unique desert plants and trees, particularly the Red Cabbage Palm.

This picturesque park is made up of rugged ranges, with rockholes and gorges. It is an important conservation region, protecting numerous native animals and plants.

Within the park there are excellent walks of varying difficulty that allow you to take in the many sights and wonders of this desert region. Places to visit include the Kings Canyon Rim, Kathleen Springs, the South Wall and Kings Creek.

Note: Even when maximum temperatures are to reach below 36 degrees (Celcius) during the day, it is important to leave in the earlier hours of the day, before 9.00 am.