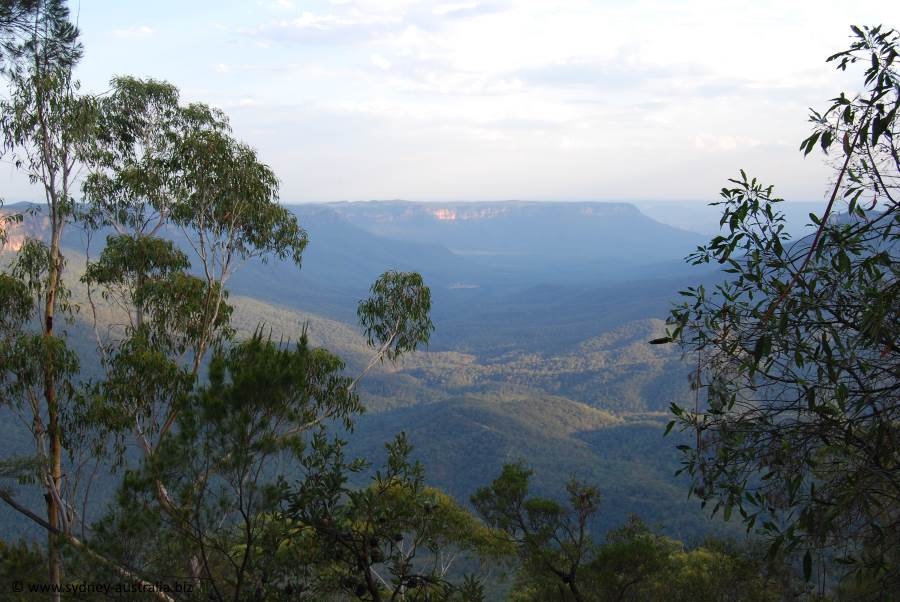 The Greater Blue Mountains World Heritage Area is made up of eight national parks, listed in the year 2000. See the Map of Greater Sydney Surrounds.

The ancient supercontinent of Gondwanaland consisted of today’s continents of the southern hemisphere, including not only Australia, but Africa, Antarctica, Arabia, India, Madagascar and South America. The vast forests of this continent deposited a thick layer of coal, something you can sometimes spot amongst the layers of the Blue Mountains, till the breakup into today’s land masses, about 180 million years ago.

Sand, coming mainly from rivers formed yellow coloured sandstone layers more than 500 metres deep. After many millenia, the weight pushed the sub layers below it further down allowing the ocean inland. An inland sea that covered the Sydney Region deposited even more sandstone that can be seen in the high ridges that form much of the mountains today.

The Blue Mountains region begins to the west of the Nepean River, then extends west to the Coxs River.

The mountains are covered primarily by the ubiquitous Eucalyptus trees, which when warmed during the day releases their water into the atmosphere, giving the mountain’s its bluish tinge.

Humans have inhabited the region for thousands of years, the Gundungurra people and in the lower parts on the Sydney side, by the Darug People. When Sydney was first settled by Europeans, it presented a barrier to the colonists for many years. Finally asking advice from the local Aboriginals gave them the way through (apparently, male explorers don’t like asking for directions) to the fertile grasslands of:

Main Photo: Valleys of the Blue Mountains - or at least one of them - Megalong Valley.