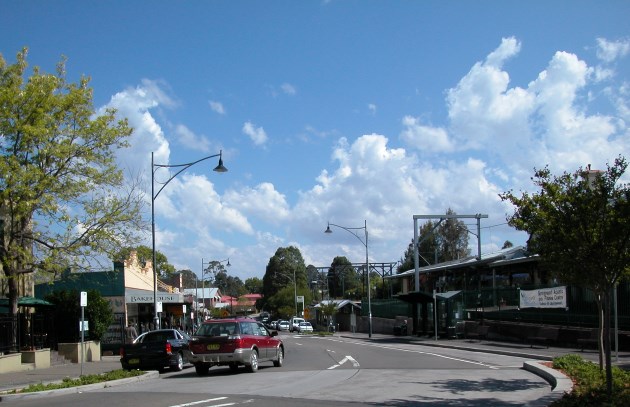 Photo: Macquarie Rd, Springwood, with the Train Station on the right.

Map of the Blue Mountains

Springwood, originally named by Governor Macquarie when he with his wife had visited the area.

The town was badly affected by the bush fires in 2013, but a recovery is well underway, as people want to keep their ties and association with the area.

There are still many historic homes and other buildings, dating back to the 1800s and early 1900s. The train station, which was opened one year after the railway line through the Blue Mountains was completed in 1867. Through time, more people began to live here with their families.

There are numerous bushland walks from here that allow you to take in the natural beauty of the Blue Mountains.

Just to the west of Sydney, the Valley Heights Locomotive Depot Heritage Museum has historical steam and tram engines, railway artefacts, photos and other displays. While there, you can enjoy unlimited 15 minute rides on their 1890s steam tram engine.

Situated in his beautiful home of one of Australia’s best known artists in pen and ink drawing, etching, woodcuts, watercolours and sculpture.

Nearby Places to Visit

There are many villages and small towns that have grown up around the road and railway that was built to traverse the mountains. Here you will find quality antique shops and art galleries to browse.

Many sought the cooler climes of the Blue Mountains since the 1800s to live here, not only the wealthy, but the talented. Artists have taken to this region, including not only famous ones like Norman Lindsay, but also the upcoming and emerging ones of today.

Painter’s, photographers, sculptors, ceramic potters and others, including design jewellers and designer fashion creators, have set up shop. So do plan sometime to see what you can find.

The suburb of Penrith, on the far west of Greater Sydney is on the way to the Blue Mountains Penrith NSW.