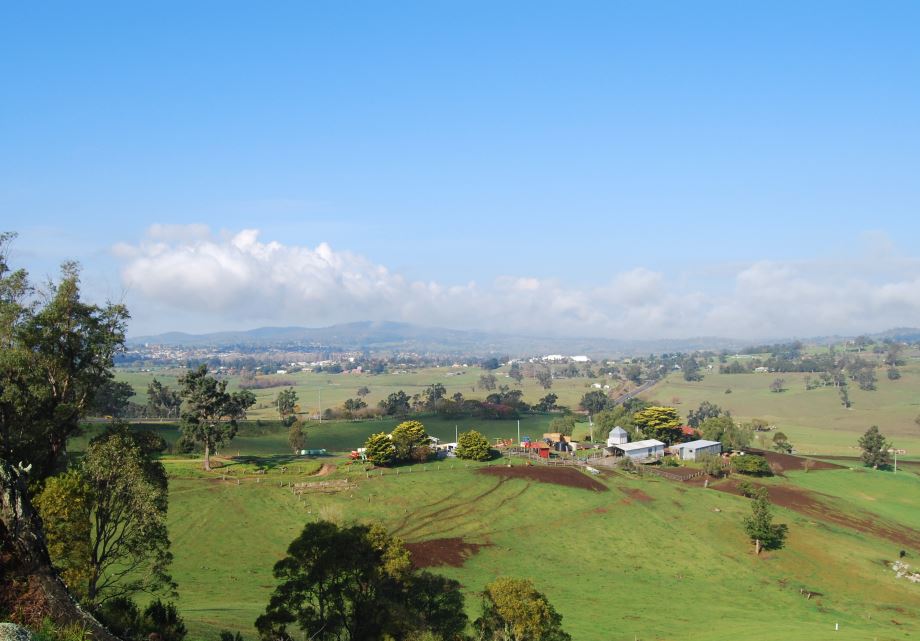 Bega Valley Shire occupies what is also known as the Sapphire Coast, 106 kms long, forming the Far South Coast of East NSW coastline. The border of Victoria and the Gippsland make up its southern border.

Farming began in this region from the 1850s onwards. Nearby on the coast at Tathra, a small port was established for the farmers to get their produce out to Sydney and points further, particularly their dairy products.

To the west, the rolling hills of Bega Valley begin to form mountains, extending up to the Great Dividing Range of Australia and at the highest peaks, the Snowy Mountains and the Mt Kosciuszko National Park.

Bega has become an art and crafts centre for local artists and artisans, visit the Artnet Gallery to see and buy artworks, pottery and craftworks. Other art and craftworks can be seen at the Valley Originals Art and Craft, located in the old Bega hospital.

The lush green and fertile Bega Valley is particularly known for its cheeses throughout Australia. Its trademark cheeses include mild, tasty and extra vintage, all aged naturally.

At the Bega Cheese Factory and Heritage Centre you can sample and buy many of the wonderful cheeses made here. They have even taken the time to achieve Halal certification Phone: +61 2 6491 7762 for more information.

To the west is South East Forest National Park, spanning more than 100kms of coastal escarpment and part of a network of parks covering the great eastern escarpment of NSW and Victoria. There are breathtaking scenic lookouts, over Bega Valley and Surrounds to the Ocean.

Some 15km north is the Biamanga National Park. Here there are secluded rock pools, great for families for swimming and picnicking. Mimosa Rocks National Park has beautiful beaches along the coast, there are caves, cliffs, coves, lagoons and lakes to explore. Backed by forests, including rainforest, there is bounteous wildlife and birdlife to spot.

At the Visitor Information Centre you can find out more information about Bega Valley and Surrounds. Located in the Bega Cheese Heritage Centre on Lagoon St, Bega. Phone +061 2 6491 7645. See Bega on the map South Coast Tourist Map.

All along the South Coast and in places like Bega Valley and surrounds, you can find places to stay - luxury resorts to scenic campsites. Accommodation available includes a wide range of styles to suit almost any budget.

Sth. Coast ocean side resorts set in stunning locations, hotels, bed & breakfasts, caravan parks, serviced apartments, homesteads and holiday lettings are just some of the options available to you.

Main Photo: Bega in the Valley.