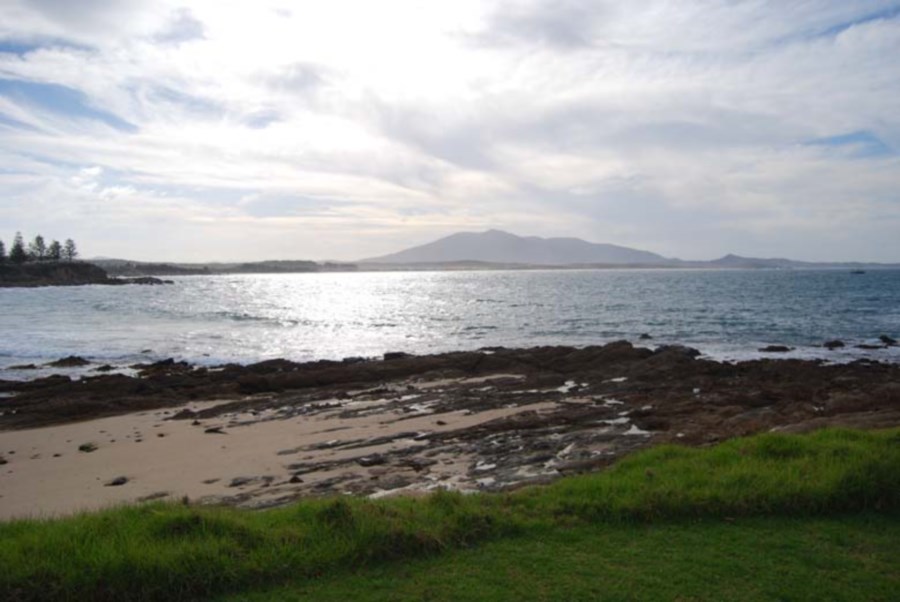 Photo: Mount Gulaga is regarded in Aboriginal Folklore as the mother of Little Dromedary and Montegue Island.
Previous Tathra Beach on the Sapphire Coast Next Tathra: Chamberlain Lookout

Bermagui on the Sapphire Coast of NSW

Formed toward the end of the Cretacous period when the dinosaurs died out some 60 million years ago, Mount Gulaga was about 3 kms in height. Since then, it has been reshaped by geological movements and weathering to 806 metres above sea level, but it is still a dominant feature of the South Coast of NSW.

Now officially handed back to the traditional owners of the land, the Yuin people, by the NSW Government. It had and still does hold much cultural significance for them. You can explore this mountain by walking the old access roads. There are fantastic views to had from there, including the surrounding national park landscape, its lakes and of course the ocean.

Most of Mount Gulaga is practically surrounded by the Gulaga National Park, Wallaga Lake NP and the Biamanga NP. Located 10 kilometres north of Bermagui and south west of Narooma and west of the towns of Central Tilba and Tilba Tilba.

Bermagui is very much a paradise for those who like to fish, this little fishing village is found on the north of the Sapphire Coast.

This is the closest place where the mainland meets the continental shelf, making easy access to deep water fishing. Charter Fishing is available, Marlin and Tuna abound. In January the Blue Water Fishing Classic is held here.

You can sample the fresh fish and other seafood at the Fish Co-Op, found on Fishermans Wharf. The prawns are delicious and the Tuna Sashimi melts in your mouth.

Bermagui Things to Do

Nearby surfing beaches include Mooreheads, Cuttagee and Bears. National Parks within a short drive from Bermagui includes the Wallaga Lake National Park, which has a 8kms long walk along the stunning coastline, past wetlands that protect the local flora and fauna.

At Wallaga Lake itself, you can find walks taking you through wild flower and native animal reserves. There are places excellent for swimming and picnics, boating and fishing are allowed in certain areas.

The Bermagui Markets are held here on the last Sunday of the month, as well as the Bermagui Seaside Fair held in March.

See a video of the Video - Scenery of the South Coast NSW. See the Map of the NSW South Coast.

NSW South Coast resorts, historical townships and sleep fishing villages are scattered along the Coast. Accommodation available includes a wide range of styles to suit almost any budget. In the surrounds of Bermagui, beach cottages, resorts set in stunning locations, hotels, bed & breakfasts, caravan parks, serviced apartments, homesteads and holiday lettings are just some of your options for places to stay here.

Main Photo: Mount Gulaga is regarded in Aboriginal Folklore as the mother of Little Dromedary and Montegue Island.