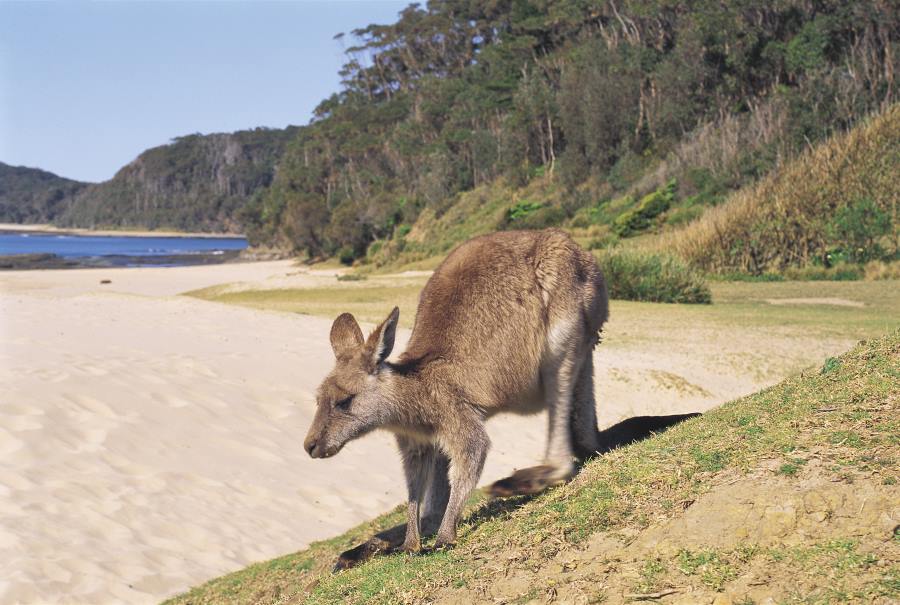 Murramarang National Park, located on the South Coast of NSW is picturesque park that protects the native animals and birdlife, along with a number of stunning beaches that are perfect for that holiday vacation.

Murramarang National Park extends all the way from Durras Lake to Merry Beach in the north.

At Durras Lake there are safe swimming beaches. Backed by rainforests in the gullies and blue gum forests, you can explore the lake and surrounds by canoe, kayak or walking tracks.

This scenic beach is makes for a nice getaway for the whole family, there are cabins to stay at. The beach is popular with snorkellers, divers, fishers as well as swimmers.

Even kangaroos visit this beach. Other beaches popular with kangaroos are South Durras, on the southern end of the park and Pambula Beach on the far South Coast.

You can also spot wallabies, echidnas, goannas and possums within the park, they are of course, protected. Colourful Lorrikeets, Rosellas, Cockatoos, Parrots and sea birdlife abound.

South Coast Beaches often have crystal white sands but others vary in colour from golden to somewhat coarse reddish sands. You can camp at some of them, Murramarang National Park for example has campsites at Pretty Beach, Pebbly Beach and Depot Beach.

Enquire at the Shoalhaven Tourist Information Centre for more about the national parks in the Shoalhaven. Princes Highway, Ulladulla Civic Centre, NSW 2539 Phone +061 2 4455 1269 at the library across the road from Ulladulla Harbour.

Due to this being a relatively undeveloped part of the Australian Coast, a number of beaches here are not patrolled by lifesavers. Always check to see if they are and when. Unless your an experienced surfer or diver, it is much safer to swim at patrolled beaches due to unexpected rips and undertows.