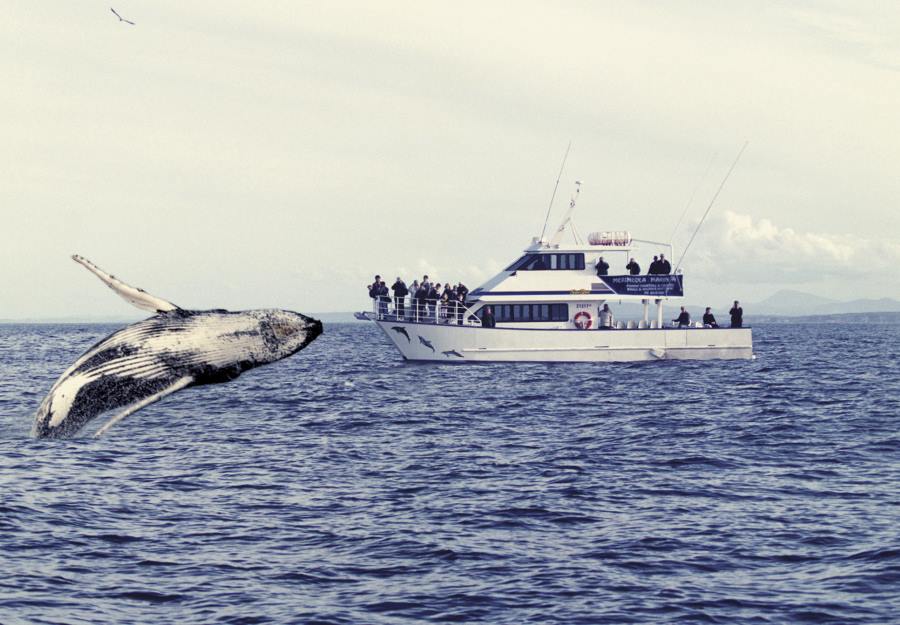 The stunning coastline of the South Coast offers many delights to the visitor. Largely undeveloped, there are a number of national parks that protect the shoreline. There are also Marine Parks, protecting the environment and marine life, key places where fish species can breed and thrive. South Coast Map.

Certainly entertaining and educational, whale and dolphin cruises are available on the South Coast from Jervis Bay and at a number of other places along the coastline, all the way south to Merimbula and Eden.

Although the whale watching cruises are strictly controlled and not allowed to get too close, the size of the whales make it easy to see them.

Whales seen along the coast on their migratory routes include the Humback Whale, the Southern Right Whale and the humongous Blue Whale. With a bit of luck, you can also see Killer Whales.

When the whales are not in season, you can take dolphin spotting cruises and often see them swimming near, under and around the cruise boat. Dolphins often like to frolic in a power boats wake, they also seem to be as curious as humans and sometimes will look straight at you trying to fiddle with your camera.

Good diving is available on the coast. This part of the east coast of Australia has wrecks, reefs, turtles, a wide variety of fish and invertebrates to see. With a bit of luck, you may be able to see whales and dolphins in their natural habitat.

Montegue Island, by Narooma, is a protected reserve and offers great diving, but you can also just take a cruise there. You can go diving with the seals at the island, when the weather is perfect you can see far in the crystal clear waters.

There are two main marine parks in the Shoalhaven. Beautiful Jervis Bay Marine Park, located 180km south of Sydney and 20km southeast of Nowra spans more than 100km of coastline.

All along the South Coast there are cruises available, most notably those that go whale sighting and dolphin spotting. Montegue Island, by Narooma is a protected reserve and offers great diving.

Regions of the South Coast

On the South Coast, there are four main regions, they all have their own charms. They include Illawarra, which is the closest to Sydney. See map: Illawarra Map.

Map of the Shoalhaven region and the north east of Victoria Gippsland region: Map of Gippsland and Shoalhaven.