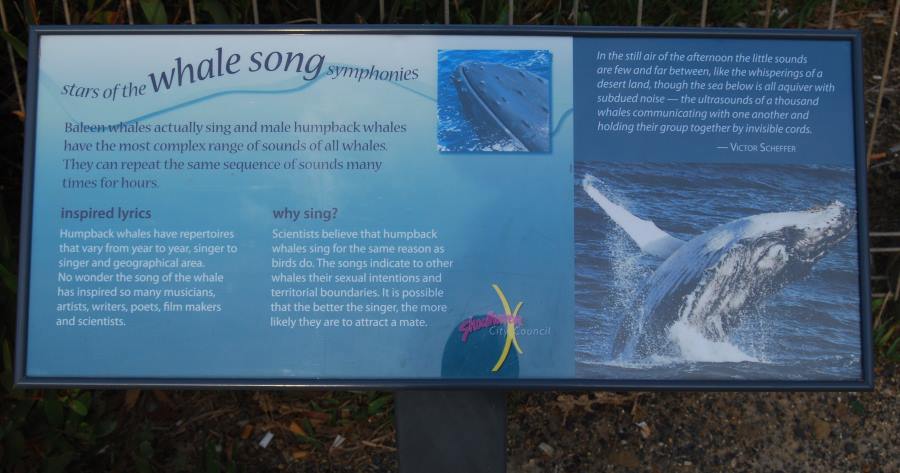 Photo: This sign at Warden Head, Shoalhaven, tells about the songs of Whales seen here during their Season
Previous Whales of the South Coast of NSW Next Sussex Inlet

Whales can be seen all along the Australian coast, including the NSW North and South Coast during their migrating seasons. Heading from the cold Southern Ocean feeding grounds, they head northwards to calve in warmer waters and then back again.

Whale song is a series of complex range of sounds that Baleen Whales as well as Humpback Whales. You have probably heard these somewhat eerie and wistful sounds on the many programs you see on TV, experimental musicians will use them in their music as well.

Whales will repeat these complex sounds for hours on end, without missing a single note.

Like birds, whales use song to communicate with each other to mark territory. They can use it, like birds (or humans for that matter) to find mates. Luckily, unlike famous human singers, they do not have to put up with hordes of screaming fans chasing them for their signature and a selfie.

Whales travel northwards to warmer breeding waters as far as the North of Australia and back to their feeding grounds in the Southern Ocean and the Antartic every year, June to September.

Different species of whales have different places to feed and breed, but the rich clean waters of the Southern Ocean and Antartica are great feeding grounds of krill and other plankton for the baleen whales, while whales with teeth eat fish, shrimp, plankton, crabs, krill and even birds if they are unlucky enough to get close.

Orcas, also known as Killer Whales, will not only eat fish, including unlucky sharks, rays and seals but other whales as well. They usually do not even chew their food, but swallow it whole.

Sperm Whales are known for their epic battles with massive squid in very deep waters.

Whales seen on the Shoalhaven Coast

From the headlands and along the beaches on the South Coast, with a bit of luck, you can actually spot migrating whales. Take a whale watching cruise from one of the many places on the Shoalhaven Coast where they are on offer, to get to see them in their natural habitat.

Although the whale watching cruises are strictly controlled and not allowed to get too close, the size of the whales make it easy to see them.

There are cruises available on the South Coast from Jervis Bay and at a number of other ports along the coastline, all the way to Merimbula and Eden. Contact the Shoalhaven Tourist Information Centre in Ulladulla for more info. Phone +061 2 4455 1269.

Places to Visit in NSW

Main Photo: This sign at Warden Head, Shoalhaven, tells about the songs of Whales seen here during their Season