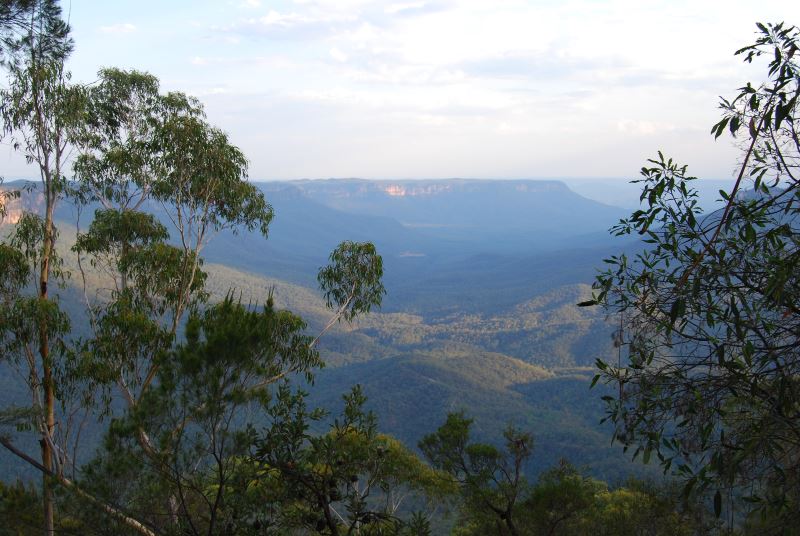 Within the city limits, as well as the larger Sydney Australia region and surrounds, you can find excellent reserves and parks to visit. Here, you can experience virtually pristine landscapes and natural environments within a few hours drive from the inner city.

You can even take the train from the city to some of these stunning places, covering tens of thousands of hectares, such as the Royal National Park (1 hour) in the southwest of the city, or head west to the mountainous region of the Blue Mountains National Park (1.5 hours). Buses can take you from the city at Wynyard to Kuringai-Chase National Park in the North.

Located some 30kms from the city centre, there are actually buses that can take from Wynyard Station to places where you can start exploring this beautiful waterside National Park. Deep valleys and waterways, formed during the last Ice Age, meander through this 15,000 hectare park.

There are beautiful beaches here, as well as waterways for boats and yachts to explore. Numerous walks, of varying difficulty, criss cross the landscape allowing you fantastic views of the surrounding region and waters.

There is a lot of history to explore here as well. Rock carvings and cave art, dating back thousands of years can be see on the Aboriginal Heritage Walk.

At the Palm Beach section of the park, there is the Barranjoey Lighthouse Walk, which affords stunning views of the ocean outlet to the ocean for the Nepean River, islands, the Central Coast, beaches and more.

A number of cruises are available that take you the more secluded places of the park. You can also hire boats and paddle boards if you want to explore on your own.

At Bobbin Head, there are picnic tables and BBQ’s for your enjoyment. You can book these:

There are many more walks and activities to enjoy at the Kuringai-Chase NP. The park is open sunrise to sunset, with the exception of unusual weather days or bush fire risks. Check out the park’s visitor centre for more information:

Another park in the Sydney Australia region, perfect for a day out, is the Royal National Park to the southwest of the city. In May to November, you may even spot whales and dolphin pods from the park’s grand cliffs overlooking the ocean. Or just enjoy the stunning views.

There are fantastic yet secluded beaches to enjoy, walks exploring the park as well as mountain bicycle trails. You can also camp at reserved places within the park, with visitor conveniences.

Just to the north of the city center is Hyde Park. Originally a horse racing ground and later the site of the first cricket match in Australia, this park now serves as a place to get away from the hustle and bustle of the city center. The Archibald fountain and the War Memorial are located there, at either end as well as a number of other monuments from Sydney’s past. See the Sydney Map.

Another excellent respite from the city are the Royal Botanic Gardens. Situated on the foreshores of Sydney Harbour and next to the Sydney Opera House, these gardens preserve not only native plant and trees, but also exotic species from all over the world. Attractions here are the Rose Garden and Pavillion, the Tropical Centre and numerous other specialised gardens. For fantastic views of Sydney Harbour, head to the north end of the park to Mrs Macquaries Point.

Scenery makes the Sydney Harbour National Park certainly the most interesting in the city. Actually a number of parks along the foreshore, they serve to protect the environment, birdlife and native animals that inhabited the Sydney region long before the arrival of man.

A number of islands are also part of this park, such as Fort Denison (Clearly visible on the harbour with its thick walled defensive tower) and Goat Island. You can visit some of these islands without special permits. Other parks have beaches that you can swim at as well as BBQ and other facilities.

At North Head and South Head you can get spectacular views of the ocean’s entrance to Sydney Harbour.

At most of the many beaches that line the foreshore of ocean, there are parks for everyone to enjoy. Most have picnic facilities and some have BBQs available. See more about Sydney Beaches.

Parks in the Sydney Surrounds

Sydney is practically surrounded by National Parks. See the Greater Sydney Map. More about our National Parks and our Australia World Heritage Sites.