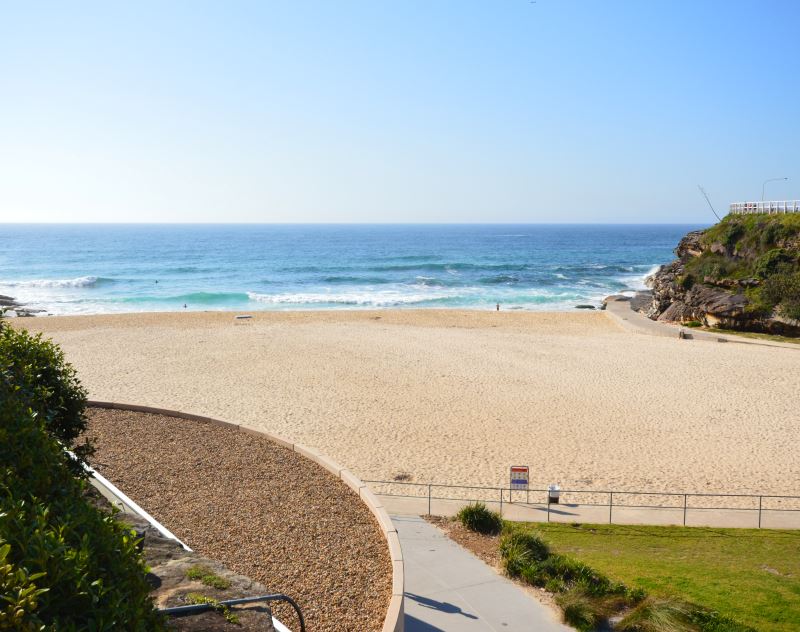 Photo: Tamarama Beach, with its park and sand, great for a Day Out
Previous Sydney Eastern Beaches Walk Next Sydney Harbour Beaches

To the east of the city there is a string of beaches that are great for a day out. Instead of heading to the spectacular but busy Bondi Beach, maybe you could go to one of the quieter ones such as Tamarama or Bronte, located just south.

You can even head there along the Eastern Beaches Walk, from Bondi Beach:

One of the many beaches that are great for younger families, Tamarama is backed by a green park and set in a small cove, protected from the larger surf (though not always) that Bondi is noted for. There are strong currents and rips here as well, so the beach can be closed for swimmers.

Still, the BBQ’s, picnic areas and playground for smaller kids can make it enjoyable. Another convenience is the public showers and toilet facilities.

The beach is patrolled during the warmer months by surf life saving guards, particularly on weekends and public holidays. However, due to the strong currents that are part of this beach, do not swim there if the beach is closed. If it is open, only swim between the red and yellow flags.

The Tamarama SLSC has a regular roster for life saving patrols. You can check to see when they are there for you and your family’s safety:

Just further south along the coast is Bronte Beach, which has a rock pool which is safer for swimmers, as does Bondi (north).

Tamarama Beach is a smaller but scenic beach along the Bondi Coastal Walk. Tamarama Beach, the larger beach on the right is situated on Nelson Bay and backed by Bronte Park. Both have surf clubs and are patrolled on weekends and public holidays.

Main Photo: Tamarama Beach, with its park and sand, great for a Day Out