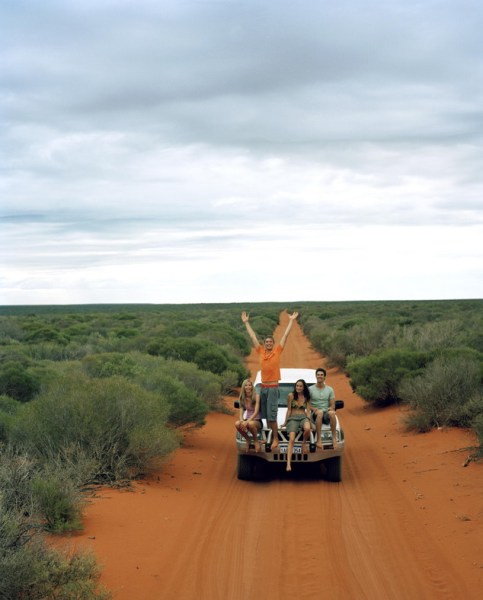 Great Western Australia sunsets can be enjoyed from the beaches here at Monkey Mia, located about 850 kilometres from Perth. The Shark Bay World Heritage Marine Park and the dolphins that come to feed at Monkey Mia Beach in the morning are the main attractions here, but the crystal clear waters are home to all kinds of marine life, protected by the borders of the marine park.

Dolphins come up close to the marine wildlife cruises on offer here, you can also spot sharks, sea snakes, dugongs and sea turtles.

There are also 4wd wildlife tours of the nearby Francois Peron National Park, as seen in the photo. A strong Aboriginal effort to teach visitors about the land can be found on the trails with regular sign posts found along the way. In fact, Aboriginals are known to have lived in this region for at least 26,000 years.

The park is located at the north end of the Peron peninsula and named after the French scientist and explorer, Francois Peron, aboard Nicholas Baudin’s ship on expeditions to WA in 1801 and in 1803.

Other attractions in this area include Eagle Bluff, with expansive views of the coast and the crystal clear ocean, the Stromatolites at Hamelin Pool, ancient and the earliest known life forms on earth and Shell beach, formed from cockle shells, up to 10 feet deep.

Denham is the nearest town with budget places to stay ranging from bed & breakfast and backpacker hostels, there is a resort at Monkey Mia as well.