Adelaide Things to Do 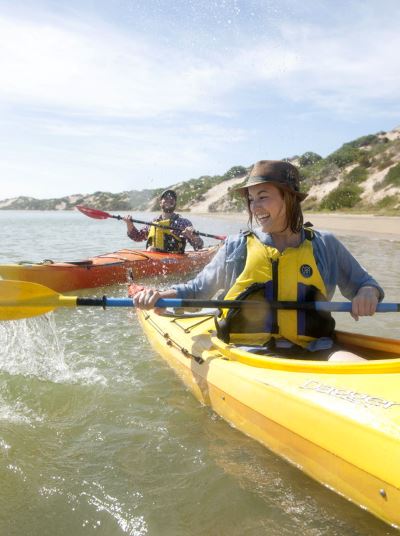 The movie ’Storm Boy’ was filmed here, sand dunes and numerous lagoons mark this park that runs along the coast, protecting 467 sq. kms of parkland and waterways. Sea birds and native animals inhabit the park.

Evidence of early Aboriginal habitation can be found in many places, the region has been occupied for many thousands of years. There are stunning views to be had at the various lookouts of the natural environment, ocean and surrounds.

A popular way to enjoy the park is to paddle in the many peaceful lagoons and waterways covering more than 100 kms. within the park. Camping is also available here, in designated areas. Angle fishing is also popular, as is exploring the park with 4WD vehicles.

At Goolwa, there are cruises available that take you to the scenic parts of Coorong NP.

When driving in the park, stay on the designated tracks. You can get more info about the park at the Mount Gambier Office

At the centre they have maps, park passes as well as all the information you need to enjoy the park. There is an information line available, phone +618 8735 1177 or contact them online at Department of Environment, Water and Natural Resources.

You can get to the park via Meningie and Salt Creek, or via historic Goolwa.

On the coast of South Australia: Kangaroo Island SA.

Hotels and Accommodation in South Australia

Find Hotels and other accommodation in South Australia: Hotels in Australia.