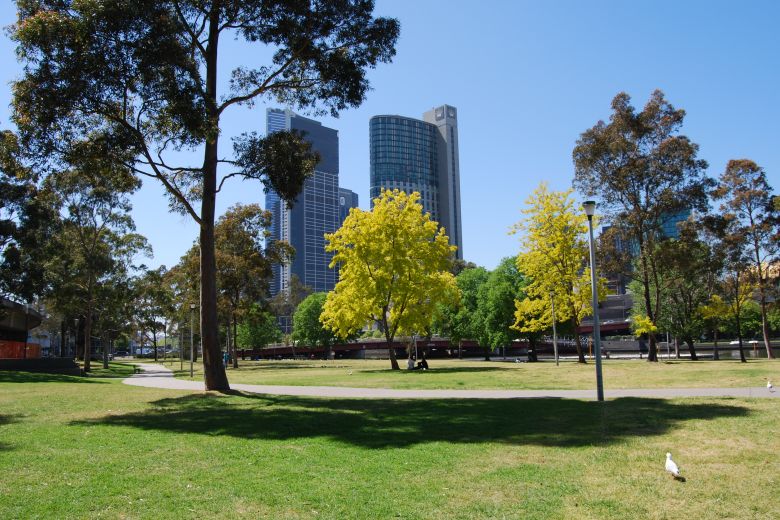 Batman Park is named in honour of John Batman - not Bruce the Batman. Born in Australia, the son of a convict, he arrived in what is called the Port Bay Phillip district in 1835.

Batman had taken it upon himself to make a treaty with the traditional owners of the land in and around Melbourne to allow him and a few others to settle in the area.

Not much later, the British government, in response to the explorations of the coast of Australia by the French, realised by possessing the whole of Australia they were on to a good thing decided they would authorise an official settlement of the region. Thus began Melbourne in Australia, later to become the capital of the colony of Victoria, then the state of Victoria.

In a short span of twenty years the settlement grew into a city, initially because of the Gold Rush, then people from all over the world settled here to start a new life.

Building boomed from the wealth created by the Gold Rush, then the Land Boom in the 1880s created another rush. Melbourne became the capital of Australia for finance and industry.

In 1927, the National Parliament, initially held in Melbourne was moved to Canberra ACT, now the capital of Australia. Post WWII, Melbourne saw another great influx of immigrants from non British countries, initially from the war torn countries of Europe, then Asia and now, all over the world.

Melbourne accommodation includes Hotels, Motels and hostels - Victoria - You can find luxury hotels to cheap places to stay: resorts to low priced backpackers, bed & breakfasts in Melbourne and in nearby centres.