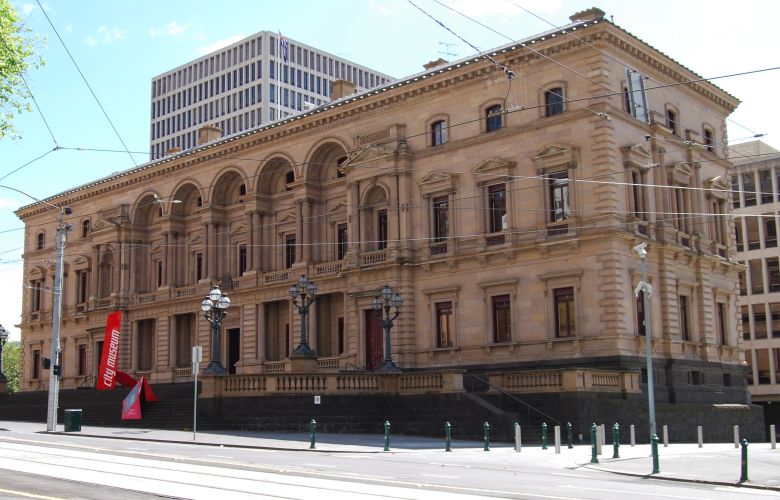 The Victorian Archival Treasures and the Built on Gold, located at the top of Collins Street (the Paris End) in the Melbourne CBD traces the history of Melbourne, from the early explorations of John Batman, through the Gold Rushes of Victoria and the city’s growth into a major city in only 30 years, to today.

Housed in the the Old Treasury Building (Renaissance Revival style) and built between 1858 and 1862, the surrounding spaces were often used to celebrate events in the growing city. The classic design was proportioned 200 ft across and 70 feet in height. There are 3 main entrances and a portico in the center.

The building was originally designed by the architect John James Clarke, when only 19 years old. J. J. Clarke, a prodigy, was hired at the ripe old age of 14 after graduating the Collegiate Institute in Liverpool, England and paid an adult wage from the beginning as a draughtsman. He went on to design many other distinguished buildings around Australia and New Zealand till his death in 1915.

The gold vaults, used when the building was still the Treasury Building, are part of the exhibitions.

Sweeping efforts at people friendly modernization in Melbourne have occurred in the past 20 years. Highlights include Southgate, with major shopping centres and a world class casino; the new Museum of Victoria and the Tennis Center. Major national events such as the Australian Grand Prix have been attracted to Melbourne, and renovation and restoration of the city’s buildings is continuing.

One of the stops of the free City Circle Tram, the City Museum surrounded by the Treasury Gardens, is located on Spring Street at the top of Collins Street.

Sit back and relax as you ride around the city centre on the historic 1920s trams. Trams departs from special burgundy coloured tram stops every 20 minutes seven days a week from 10.00am to 3.00pm. The trams run along Flinders St, Spring St, Latrobe St and Spencer Street. Melbourne City Circle Tram.

You can find accommodation throughout Melbourne Australia: luxury resorts and hotels to budget priced Backpackers, including in the CBD. Accommodation available includes a wide range of styles to suit almost any budget.