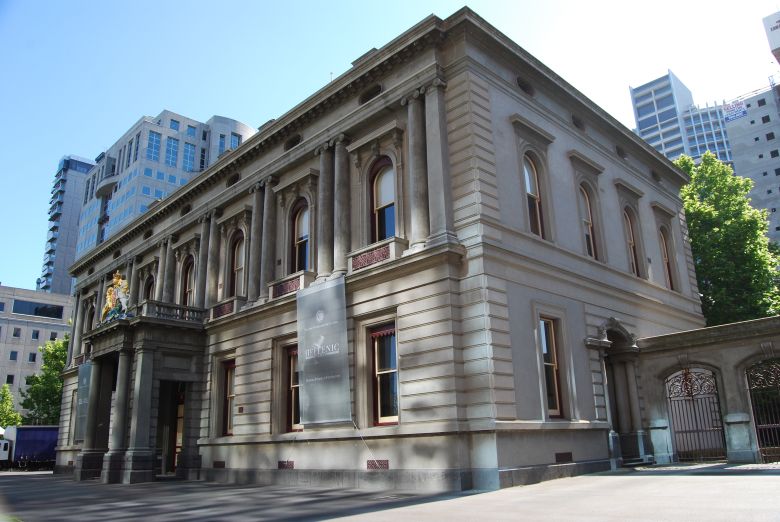 Now the home of the Hellenic Museum, dedicated to promoting Hellenic history and civilization in this part of the world. This beautiful Melbourne building was built between 1871 to 1872 and is now classified by the National Trust.

The site was originally occupied by the Melbourne Exhibition Centre till it was destroyed in a fire. Gold coins were minted on this site, although the functioning buildings such as the coining hall, the melting and assay departments are now gone.

The coins were minted here from 1872 till 1968, when decimal currency was introduced as the official Australian currency and coins were made in Canberra.

The building which you see in the photo served as the administrative building of the Mint. It is regarded as one the finest examples of conservative classicism in the country, being modeled after Raphael’s Palazzo Vidoni-Caffarelli (built circa 1524) in Rome. Other buildings that remain on the site are the guardhouse, the home of residential guards and the iron gates and perimeter wall.

This grand building was designed by the renowned Colonial architect J. J. Clark, who worked for the Public Works Office from the young age of 14 in 1852 until 1878. He went on to design many other notable buildings in Australia, including those in Perth, Brisbane and Sydney. Other buildings in Melbourne designed by him include The Treasury Building (1857), Customs House (1873) and the Victorian Titles Office (1874).

See the location on the Melbourne Map Map of Melbourne Australia.

You can find stylish to budget accommodation in Melbourne Australia: luxury hotels to low priced backpackers, including in the Central Business District (CBD - Downtown).

There are even Melbourne bayside resorts, suburb and regional hotels, bed & breakfasts near the beach or in the suburbs, serviced apartments and holiday homes.