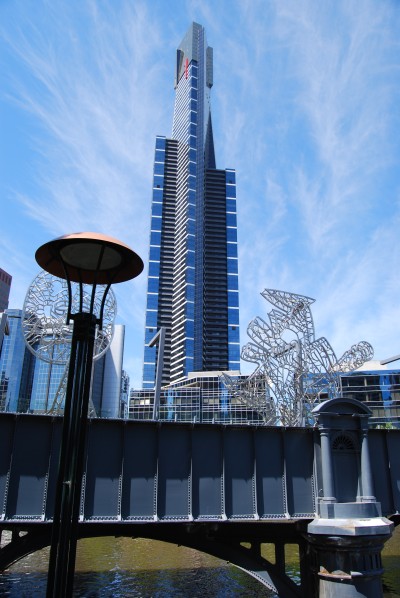 Venue for the Melbourne Eureka Climb, now an annual event for charity fundraising, is held in November for running, climbing and crawling to the top for contestants. The Eureka Building is still the second tallest residential building in the world, eclipsed only by the Q1 Tower in sunny Queensland.

Of course the title for this may be taken soon, if reports about the Chicago Spire are true. Other competitors looming in the near future are the the 395 m (1,296 ft) 23 Marina in Dubai and soon after, the Dubai 414 m (1,358 ft) Princess Tower.

Regardless, the Eureka Tower will remain the tallest building in the city of Melbourne for a long time and is a must go Melbourne place to visit. Construction started August 2002 and finished on the 1st of June, 2006.

The view of Melbourne city and surrounds is unparralled. The grand heritage buildings of the 19th century Gold Rush days, amongst the growing number of glass office and residential high rises, contrast sharply.

The sweeping views of Port Phillip extend past the beaches of St. Kilda, Brighton and Sandringham to the east and on a clear day, to Geelong and surrounds in the south west.

How to Get Here

Access to the site is easy with the trams from St Kilda, the city centre, Port Melbourne and West Preston, routes 96, 109 and 112. Not hard to spot, you can also catch trains from anywhere in Melbourne city and surrounds to either Southern Cross station or Flinders St. station and just take a short walk across the Yarra River. For more information about transport here, see the Melbourne Public transport site at www.metlinkmelbourne.com.au.

You can find parking in the Wilson Car Park available underneath the Eureka Tower, cnr City Road and Southgate Avenue. To get more information about the great views from the Eureka Tower, contact General Skydeck / The Edge Information: Phone: +61 3 9693 8888. See Eureka Skydeck 88.

You can find places to stay at throughout Melbourne Australia: hotels to luxury resorts to backpackers and Caravan Parks. Self contained and serviced accommodation available includes a wide range of styles to suit almost any budget.

Photo: The Tower seen from across the Yarra River