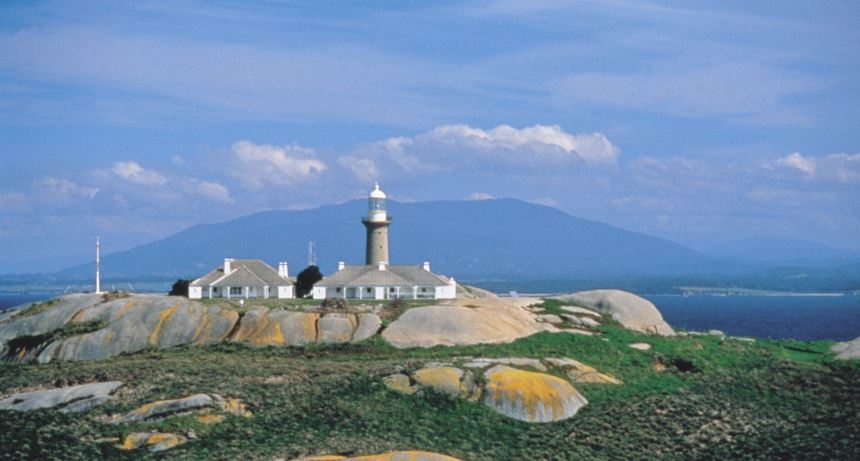 Photo: Granite lighthouse on Montague island with Mt Dromedary in the Background.
Previous Places to Visit on the South Coast of NSW Next South Coast Fishing

Islands on the South Coast of NSW

The many islands off the coast of South NSW are usually remainders of lava flows, even volcanoes or their plugs, protecting their bases from wear and tear from the waves, wind and weather over the millenia.

Green Island, known for its surf. Nearby is Conjola Island on Lake Conjola.

Crampton Island, in the mouth to the sea of Lake Tabourie. This island can be accessed during low tide from the land.

Stokes Island by the mouth of Termeil Lake to the sea. There is a picnic and beach there, located in Meroo National Park.

Brush Island by Bawley Point. This island nature reserve is for the protection of the native animals and seabirds, no public access.

Tollgate Islands near Batemans Bay, there are others in the bay itself. The Tollgates are a protected nature reserve.

Jimmies Island, offshore from Rosedale, in the Batemans Marine Park.

Broulee Island, east of Broulee is a protected island nature reserve, protecting the flora and fauna.

Montague Island, some 9kms off the coast of Eurobodalla at Narooma is home to thousands of sea birds, penguins and fur seals. Here you can also spot whales during the months of September and November and dolphins throughout most of the year.

It is known the island has been use by the local Aboriginal people for thousands of years, the lighthouse was built here in the late 19th Century and still is in use today.

There is limited accommodation available in the fully restored head keepers quarters. It is very exclusive, only one group or family can stay at a time, providing a very unique experience.

There are half day cruise tours available from Narooma, including one where you can spot Little Penguins as they arrive at dusk during their season. The morning cruise tours include learning about the island’s history and its unique eco-environment and wildlife. Both island cruises also take in whale sightings in season.

Enquire at the Narooma Visitor Information Centre, on the Princes Highway at Narooma for more info about Montague Island, NSW 2546. Phone 1800 240 003.

Main Photo: Granite lighthouse on Montague island with Mt Dromedary in the Background.