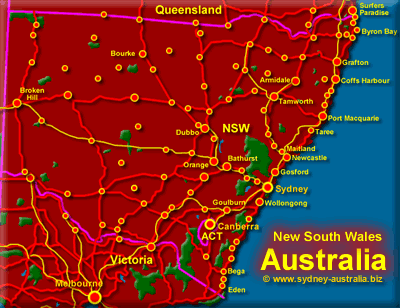 NSW Regions and Places of Interest

Just north of Sydney yet beautiful, the NSW Central Coast:

One of the great wine growing regions of Australia, the Hunter Valley. Great for those exploring the Australia Food and Wine Trail:

Maps of the North Coast

Those travelling North to Brisbane or from Queensland south to Sydney, would find the North Coast a great place to stay a while. Explore its long beaches, thick native forests and stunning National Parks. You&rsqoull find some very beautiful NSW coastal resort towns, for relaxation, fun in the sun, fishing, diving, whale and dolphin spotting and more:

The Northern Rivers of New South Wales form the North East coast corner of the state. Another popular stopoff point, like the North Coast for those travelling the Sydney to Brisbane route.

The Snowies as they are popularily called, the Snowy Mountains are known for their snow, ski-ing and winter sports in winter, yet scenic the year round as part of the Australia Alpine Regions:

The South Coast NSW is not as popular as the North Coast, making it a great getaway from Sydney. This map show the South Coast from Illawarra to the Victoria border and the Snowy Mountains:

New South Wales covers an area with terrain varying from desert to snow capped mountains, vast plains and beautiful coastline. If you get the chance to tour the South East of Australia, try to stop at some of the wonderful National Parks along the way. The major routes from Brisbane to Sydney, Melbourne to Canberra to Sydney and Adelaide to Brisbane in Queensland are shown.

Exploring the tourism regions of NSW:

These maps show the continent of Australia and Tasmania, States and Regions: