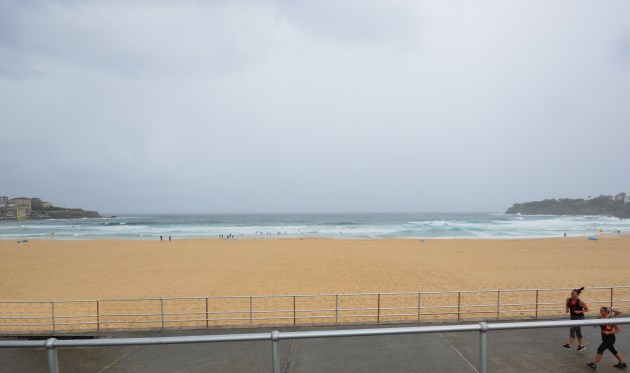 Photo: Even on a Stormy Day Bondi Beach attracts Visitors

Long a drawcard to sun and surf lovers, Bondi Beach is quite easy to get to from the city centre. Because of its fame and beauty, it attracts not only locals living in Sydney Australia, but visitors from around the world.

Referred to as the Golden Mile because of its sandy beach forming a long gold sand crescent, there is not only surf waves here, but plenty of space to do other things. Originally, when people only entered ocean waters to bathe, spending time in the water before the year 1906 was banned. Apparently, if you were too poor to have access to a place to wash yourself and yet were clean minded, you were not welcome.

People were allowed to ’bathe’ at the Bondi Baths, built by the local council, with separate sections for the men and women. First opened in the 1880’s, in 1929 it also became home to the Icebergs Club, whose members have a special attraction to swimming in ice cold water. In fact, they have quite strict rules for membership, you need to swim and compete in ice cold waters!

Once the ban was lifted, so did the popularity of the beach: Bondi Beach.

Further along the coast, heading north, you can find the Sydney Harbour National Park at South Head, the entrance to the harbour:

There are two located here, one at the north end of the beach, and another by the Bondi Pavillion.

Always swim between the red and yellow flags, when the beach is patrolled by surf lifesavers. It is also good to have a friend to swim with.

Photo: Wide south angle view of the Beach at Bondi, further along are more Beaches