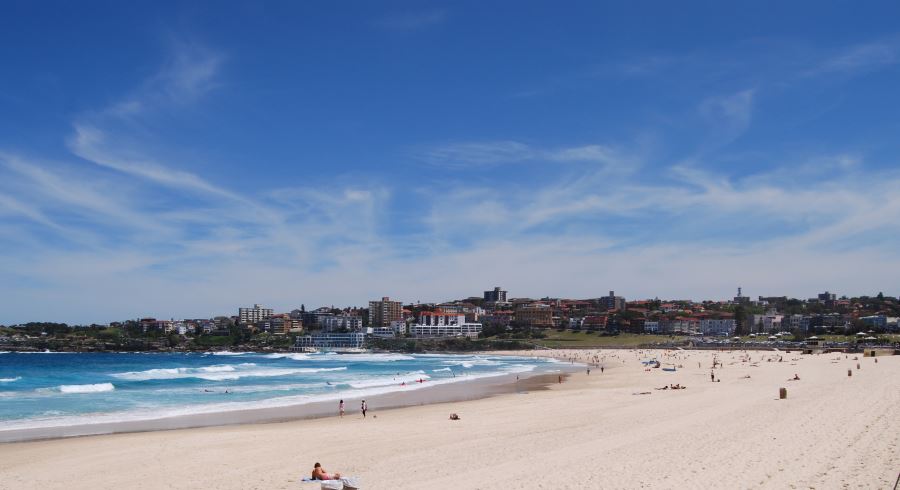 There are actually two surfing schools to learn riding the waves, one at the north end of the beach, ’Lets Go Surfing’ and the ’Waves Surf School’.

Waves Surf School, located on Campbell Parade at the southern end of Bondi Beach is based here, yet provide lessons at many different beaches, from beginner to advanced. They also do surfaris to more places and have surf camps:

Another well known surf school is situated at the north end of the beach. They have lessons for five year olds and up, as well as more advanced classes for those more experienced:

Visitors and swimmers need to be aware of the beach rips and currents that can happen at Bondi. The local Surf Life Saving Club has beach safety patrols during the warmer months, remember to swim between the flags!

They have the honour of being the first formed Surf Life Saving Club in Australia, having been established in 1907. Only seems like yesterday! Located next to the Bondi Pavilion:

The Eastern Beaches Walk, which starts at the north end of the beach, takes you past spectacular scenery of the Sydney region coastline, the many beaches located along the way, and with a bit of luck, offshore whales and dolphin pods:

You can also take a walk along the north side, which will take you the South Head, for stunning views of both the city, the harbour, the ocean and the outlet of the harbour to the ocean. Truly awe inspiring! It also takes you past the historical Bondi Lighthouse, a site occupied for more than two hundred years.

Close to the City

This internationally known beach is also the closest to the city centre. There are rock pools on both ends for families. Located on the NSW Coast, some seven kilometres from the centre of Sydney.

Bondi can attract more than 40,000 visitors on a summer weekend (Dec - Feb), but also during the cooler months. More about Bondi Beach Sydney.

Beaches on the Sydney Coast

Main Photo: View of Bondi Beach towards the South Headland