Within easy reach of the city are Sydney’s east and south beaches. Starting with Bondi beach on the northern end and all the way down to Cronulla Beach, on the other side of Botany Bay.

Famed for its surf, swimming and lifestyle, Bondi Beach has become an Australian icon, has something for everyone and is the closest beach to the City Centre. The area has a relaxed and active nightlife with a good array of restaurants, cafe’s and night spots.

Other things to do there include shopping, golf by the sea and enjoying the local’s café beach culture.

Although much smaller than Bondi, Tamarama Beach, located just south of Bondi, has a nice park located just behind the beach, with picnic and BBQ facilities.

Good for surfers, has Surf Club and change facilities. Off Bronte Road.

Near Tamarama, Clovelly and Coogee beaches, Bronte Beach is just south of Tamarama beach. Good for swimmers and surfers alike. A scenic beach at the end of a green valley and shady park, it makes for a nice getaway for the whole family. There is a surf club and there are change facilities, and on the south end, a rock pool. For getting to Bronte Beach, take Sydney Central Rail Station Bus 378. Off Bronte Road.

Popular with snorkellers, divers, fishers as well as swimmers, there is a shallow lagoon suitable for small children, but on rough days, there is a rock pool. Has change facilities. There are plenty of eateries available at nearby Coogee. How to get to Clovelly Beach, take Wynyard Bus 339. Off Clovelly Road.

Popular with backpackers and the younger set, it is better for swimming than surfing. The locals and traveller backpackers are known for their friendly attitude. Offers a night life with all kinds of Al Fresco restaurants and eateries including the well known Coogee Bay Hotel. Has good barbeque facilities and picnic tables with a playground for children in the park.

Part of the Bondi Coastal walk, where you can enjoy some fantastic ocean coastal scenery. Surf Club, Change Facilities. Coogee Bay Road, how to get to Coogee Beach, take Town Hall Bus 304, Central Rail Station Bus 372, or the 373 from Circular Quay.

Maroubra Beach has surf clubs on both the north and south end, good for swimmers, but especially body surfing and boards. Change and shower facilities, Access: Fitzgerald Avenue from Anzac Parade. How To get to Maroubra Beach: Circular Quay Buses 377, 396, Central Rail Station Bus 395.

Cronulla Beach is actually four named beaches on the 5km long beach, adjoining each other, backed by Cronulla Park, with Shelly Beach just further to the south. See Wanda, Elouera, North and South Cronulla below...

There are number of rock pools on the south side and a notable scenic coastal walk to Bass and Flinders, with views towards Port Hacking and Bundeena. The park has picnic facilities and change facilities. Cronulla Beach itself has lots of eateries including al fresco restaurants, a varied night life and a Multiplex cinema.

The Cronulla Beaches is a favoured Sydneysider place to go. In the photo below, note Botany Bay on the upper left corner and the train station in the centre, with the other beaches stretching north on the oceanside.

Getting to Cronulla Beach

How to get to Cronulla: you can catch a train from Sydney Central Station and along the Sydney City Circle, or along the route.

The Cronulla beaches can be reached by bus but it may be quicker by train: Beaches by Bus or Train.

Finding work in Sydney see Sydney Jobs. It may also possible to work while studying here: Study in Australia.

Photo: On the Bondi Beach to Coogee walk 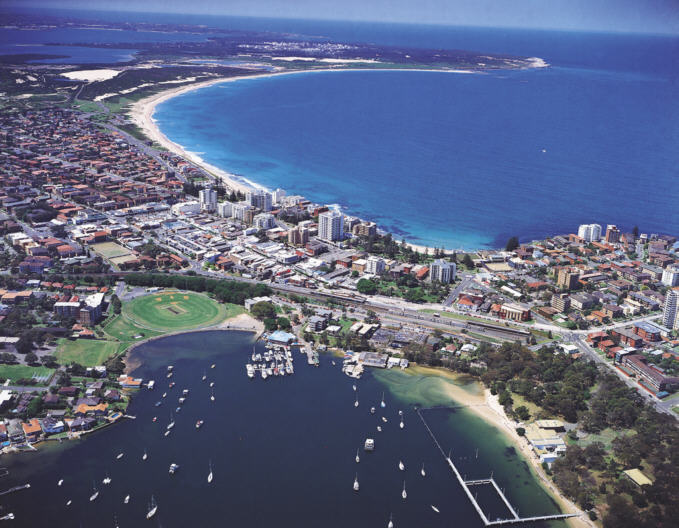 Photo: Cronulla has a number of great beaches to visit