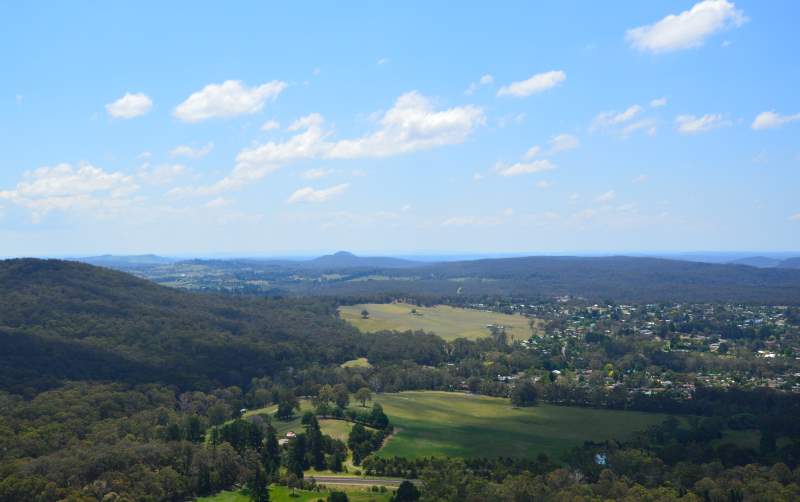 Located not far between Bowral and the town of Mittagong in NSW is the Mount Gibraltar Reserve with its spectacular lookouts of the surrounding district. Well worth the short drive to see the sights, as well as the chance to enjoy the picnic and rest areas near them.

Mt. Gibraltar Reserve is some 130 hectares in size, created to protect the native flora and fauna found in the district before the arrival of European settlers. The plants and trees have been carefully preserved while the exotic species have been removed.

Mittagong Lookout: Looks northward, on a clear day you can see for many miles. The surrounding district of the hills, mountains and the remains of the ancient volcanoes provide a breathtaking view. You can access the walking tracks from here.

Jellore Lookout: Looking towards the north-west of the region, you can see the Southern Railway Line as it traverses through both Mittagong and Bowral and into the distance. In fact, on a good day (of which there are many in this region) you can see all the way to the Blue Mountains World Heritage Area with its millions of trees, as well as the Nattai Wilderness. Another prominent feature is Mount Jellore, standing out amongst the many valleys, hills and mountains that you can see from here.

The Bowral Lookout: The view provided here is to the south-west. Overlooks Bowral and the Wingecarribee Valley, past Moss Vale and to the Capital Country of NSW.

The lookouts themselves have easy access and all three are only a short walk from the road. The road loops near the top, which can be accessed from Bowral Road at the corner of Bessemer Street. There are also excellent walking tracks that take you past the sights.

Below are some of the many walking tracks here that take you past many scenic, natural and historic views:

Rim Track: The Rim Track, some 1.2 kilometres long has all three lookouts along its path with stupendous views. Probably not recommended on the few really extreme hot days a year this region gets between 11am and 3pm, but otherwise, very enjoyable.

Ravine Track: Linking two of the tracks here, the Gib East Fire Trail and the Ravine Track, it will take you from the Hawkesbury Sandstone communities to Trachyte. Crosses Chinaman’s Creek.

Heritage Quarries: Takes you past the two disused heritage trachyte (fine-grained volcanic rock) quarries and up to the Bowral Lookout, via the Stone Stairway.

The historical town of Berrima, just a short drive from Mittagong and Bowral was cutoff from the main railway line in the 1800s and the inter-state highway in the 1900s. It consequently preserved not only its buildings, but its history:

Photo: Looking towards Bowral and beyond from the Mt. Gibraltar Reserve