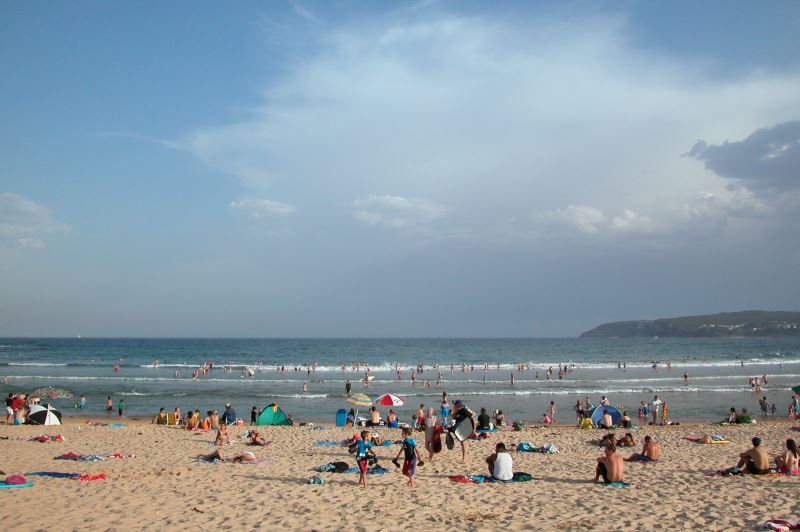 Freshwater was the beach chosen by the great Duke Kahanomoku to introduce surfing to Australia. He surfed this beach in 1915 to the amazement of locals, starting off the love of surfing held by many Aussies today. The event was celebrated in 2015 with Dukes Day, complete with re-enactment.

Allthough smaller than most beaches on the north shore of Sydney (north of Sydney Harbour) it has all the public facilities needed for a great day out, including a rock pool on the north side for swimmers when the surf gets too big.

Other useful public facilities include a kiosk, places for picnics and bbq’s. Just up the street from the beach, there are a number of eateries and restaurants in the small shopping centre of Freshwater. Pay parking is available at the beach, as is a viewing platform and a playground for the kids.

Freshwater is part of the World Surfing Reserve, for its historical connections and surf:

The 139 bus from Manly Wharf, passes along Manly Beach and then heads off to Freshwater, then goes to South Curl Curl. Get off at the stop on Moore Rd, just on the other side of the Freshwater shopping centre, and take a short walk to the beach along the street, or take the bus to Lumsdaine Drive near the Harbord Diggers Club, then just head down the hill towards the beach and park.

The Surf Life Saving Club at Freshwater performs regular life saving duties at the beach for much of the year (currently October to April). Please follow their instructions, they are there for you and your families safety. Remember, when swimming, Stay Between the Flags!

Covering Up - Sydney has bright sunny days so wear sun-protective clothing, especially between 10am to 3pm. Find a good SPF30+ sunscreen that is water resistant. Use shade and wear a hat, it all helps to stay looking young, healthy and beautiful as you do.

There is a regular bus service from the city as well as Manly Wharf, located on the north side of Sydney Harbour. You can catch a regular bus service from Manly (151). Catch the ferry from Circular Quay at the foot of the city, enjoy a ride on the ferry or jetcat over the stunning harbour and take the bus past more beaches and scenery. The bus stop is at the Manly Wharf where the Sydney ferries and jetcats travel to.

From the city, catch 155 or 156 to the North Shore. Bus services start at Wynyard Train Station in the Sydney CBD (centre). The Map shows Wynyard, bus stops are around the green park next to the station.

More about the Sydney Northern Beaches

Main Photo: Freshwater Beach with North Head in the distance

Photo: Freshwater, with the rock pool on the right