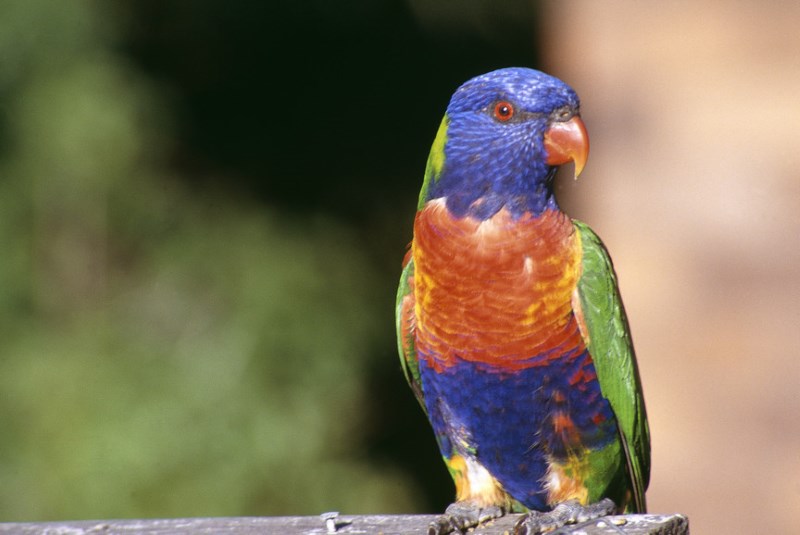 Photo: Rainbow Lorrikeet: These colourful birds can now be seen in many places along the coast of Australia.
Previous Magpie Next Saltwater Crocodiles

Rainbow Lorrikeets can be found along the coastline of Australia, where they nest in very tall trees such as the Norfolk Pines found along Manly’s beachfront. Their habit of sleeping in rows on branches of high trees keeps them safe from domesticated predators such as cats and dogs, while their noisy screeches scares bigger birds away.

They live off flower nectar and pollens, but also eat fruits, fruit nectars, seeds and some insects. They have a lifespan of up to seven to nine years.

They are known to fly up to 50kms a day to feed, often in regular flight path patterns at the same time every day. They are also extremely fast flyers, being clocked at over 40kms per hour, often travelling in pairs or large flocks.

They have become extremely successful as a species here in Australia because of those reasons and have now spread as far away as Perth and the far north. Although somewhat friendly towards humans they can also push out other native birds from their habitat with their nesting behaviors.

At the Currumbin Wildlife Sanctuary on the Gold Coast in south east Queensland, you can experience these birds up close, even have breakfast while they have theirs. See:

Other places to see these friendly, colourful and noisy birds:

They have a distinctive reddish beak with a blue (mauve) head and belly. Their wings, tail and back are a beautiful bright green while they also have an orange/yellow breast.

There are six different types of Lorikeets in Australia, small to medium parrots in size. They can measure from 150mm (6″) to 400mm (16″) in lenght. They usually have bright colours, with the colours of the birds depending on which species they are.

Main Photo: Rainbow Lorrikeet: These colourful birds can now be seen in many places along the coast of Australia. 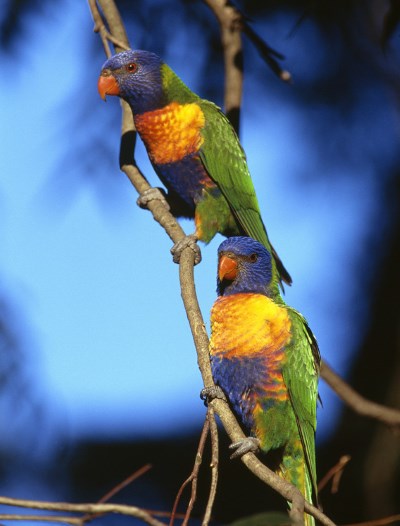