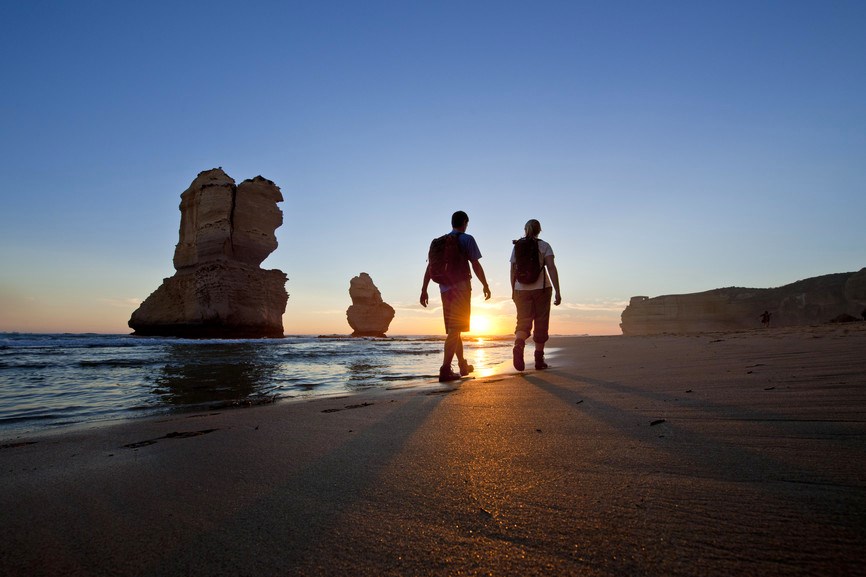 Touring Australia: Port Campbell National Park and the Twelve Apostles Marine National Park, located on the Great Ocean Road in Victoria allow you to see and visit some of the most beautiful and picturesque places in the country. They also harbour abundant native wildlife including birdlife, seals, penguins, koalas, wallabies and in the right season, dolphins and whales.

There are Aboriginal guided tours available, allowing you to get an unique perspective on this ancient land. There are walking tours of this region along the coast, self guided as well as guided, for day tours, 4 day tours or up to 7 day tours. Another way to see this region with its grand views is to take a helicopter tour.

Natural wonders here are the Twelve Apostles and the Loch Ard Gorge, natural formation made from the interactions of the wind and raging surf on the high sandstone escarpments that divide the land from the ocean.

These pillars have formed over many thousands of years. Protected at the bottom by the slower wearing Gellibrand Marl, a mixture of clay and marine shelf deposits formed during the early Miocene age (5 to 20 million years ago). The rest of the sandstone escarpments that were originally here have receded northwards, leaving the towers.

The natural formation of Loch Ard Gorge, a large archway, is located west of the Apostles. Named after a a shipwreck that occured here in 1878 on nearby Mutton Bird Island, it shows the everchanging waves and wind effects on this coastline. Other arches include the London Bridge (now collapsed) and the Island Archway.

There are numerous other shipwrecks along the coast. The lack of lighthouses and the storms that could arise here combined to leave many wrecks. In fact the shoreline here is called the Shipwreck Coast.

Wedged between the Port Campell and the Great Otway National Parks, consists of some 7,500 hectares, running east to west along the coast for some 17 kilometres. Not only does this park protect the coastline, but also the pristine waters that hold underwater structures and a wide variety of marine life. Whales pass here to migrate to their feeding grounds in the south and their calving grounds, some as far as the north of Australia.

Lord Ard Gorge and the Apostles are located within this park. Underwater, there are sub-tidal canyons, more arches, cliffs and walls that harbour an outstanding variety of marine life. Above ground, birdlife here includes gulls and albatross.

This park can be explored on foot or by car along the Great Ocean Road, stopping at the many scenic lookouts and points of interest. Popular places to visit include the Grotto, Gibson Steps, London Bridge and the lookouts overlooking the Arches.

Other popular activities here include fishing, canoeing on the Gellibrand River, diving and swimming.