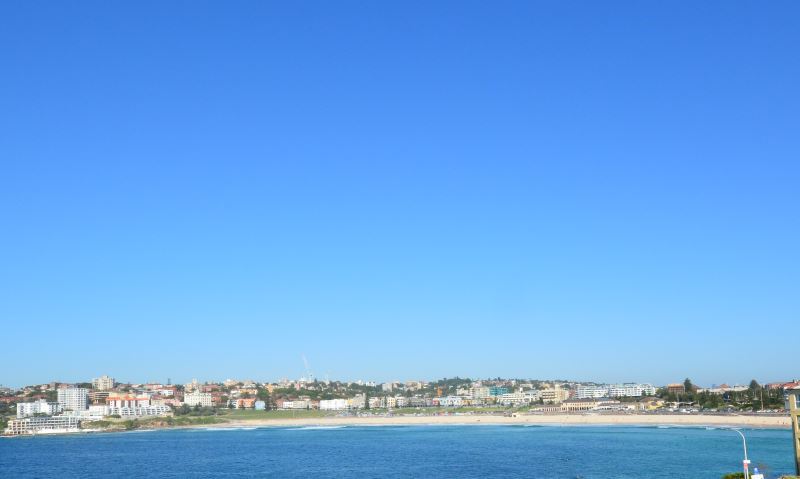 This beach in Sydney Australia is also the closest to the city centre, which makes it a popular place to visit anytime of year, with visitor numbers peaking through the Christmas and New Years season.

Interestingly, you can also get bright sunny days here even during the so-called Australian winter, so-called as temperatures do not even get close to the more southerly and northerly climates. The water, though, can get cold, making surfing another big attraction here as there are not as many swimmers, while the surf can get pretty active.

Still, there are plenty of things to do even when the weather is not warm or sunny. There are some first class restaurants here, access to the city is easy, while there is a large variety of quality of accommodation here which makes it an attractive place to stay anytime of year. There is also a great collection of eateries to try.

There are two great walks from Bondi Beach, one at the northern end and the other at the southern. The one that takes you northwards is the South Head walk, along here, there are historic places that date back to the beginning of early colonial settlement as well as traces of Aboriginal habitation.

At the southern end of the beach is the Bondi to Coogee walk. It takes you past idyllic beaches all the way to Coogee Beach, another one of Sydney’s famous beaches. In fact, the walk has now been extended and for the adventurous will take you all the way to Maroubra Beach and even Botany Bay.

The crescent shape of the beach at Bondi in Sydney stretches for more than a kilometre. This large beach attracts thousands of water and fun lovers every weekend.

During the week, except during holidays, the beach can be far more quiet, as do other Sydney beaches. At other times, this ocean beach can also get large surf, so people need to be aware of the red and yellow flags and to swim between them.

Map showing the beach at Bondi and other beaches:

You can park at Bondi, but it gets very busy during summer weekends. Getting to Bondi Beach:

There are regular bus services to Bondi Beach and conversely, back to the city from Circular Quay. Another way to get there is to catch a train to Bondi Junction, then catch a connecting bus to the beach and vice versa. 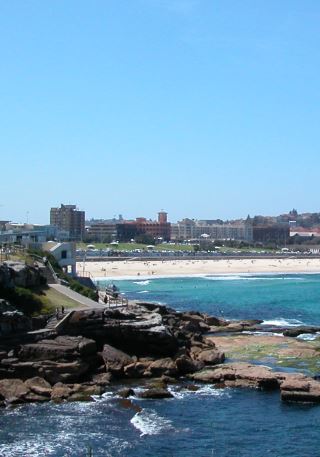 Photo: On the Bondi to Coogee Walk

Photo: View of the coast from Fiszmans Park, at the northern end of Bondi Beach, looking south.